RMT raises new safety warning over use of phoney guards 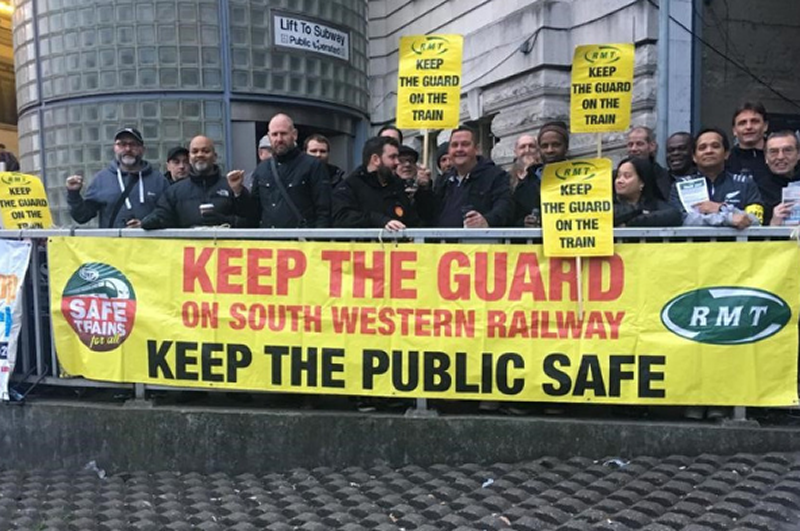 As Northern and South Western guards strike again in fight for safety RMT raises new safety warning over use of phoney guards.

As Northern and South Western Railway guards strike again this weekend rail union RMT has raised new safety warnings with the regulator over the use of inexperienced, under-trained managers on fat bounty payments acting as guards to try and break the action.
Members on South Western Railway will complete five days of rock-solid strikes in their latest phase of action this weekend while RMT members on Northern Rail will embark on their 33rd day of action in the fight for safe, secure and accessible rail operation for all.

In a letter to the safety regulator, the Office of Road and Rail, in relation to this week’s SWR action RMT General Secretary Mick Cash points out the following serious breaches that could have had severe consequences:

Further to that I have a reports coming in that due to the signal failure between Woking and Surbiton trains have been re-routed via the new line (Surbiton to Guildford via Cobham). The Contingency Guards (PUG) are not trained on this route and therefore have no route knowledge. The company are quoting to my reps, “that as long as the Driver knows the route it is fine”.

It is not ‘fine’ as the ORR will know, and these significant breaches of safety have to cease.

I am also raising the concern that incidents are not being reported in the correct procedural order and that when the Contingency Guards (PUG) are subsequently asked they are claiming that they didn’t know or where not aware of the said incident – my members have faced disciplinaries in these circumstances previously.

This is what we are aware of, there may very well be more and worse.

“It is appalling that rather than settling their disputes these train companies are prepared to throw huge sums of money at a scab-army of volunteer managers who are a clear danger to passengers. It’s about time the safety regulator, who is funded by the private train companies, stopped letting the piper call the tune and took action to stop this dangerous nonsense.

“The continuing action by RMT members on both SWR and ARN is about putting public safety before private profit while the train companies, with the connivance of the government and the safety bodies, are prepared to rip up the rule book to bulldoze through their plans for driver only operation.

“Instead of tolerating the clear and present danger on our railways the train operators should be round the table with the union negotiating agreements that reflect the best practice in the industry and put safety first.”