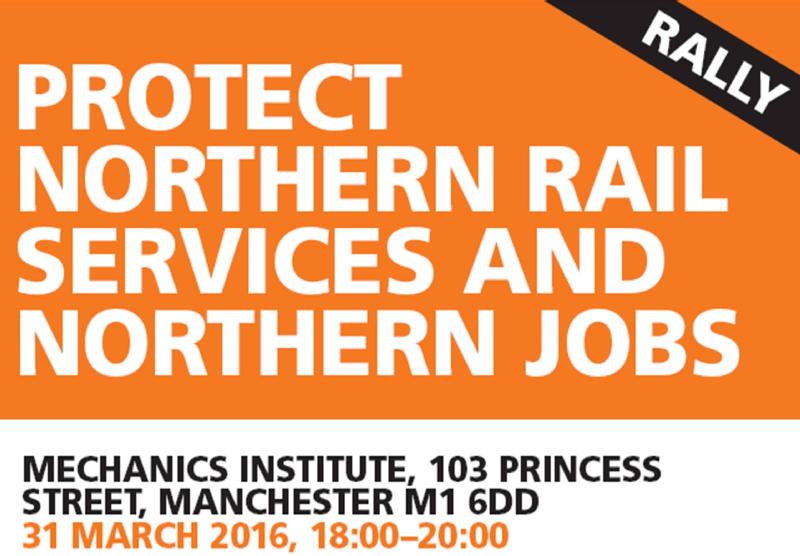 RMT rally to defend services, safety and jobs on eve of Northern Rail hand over to Deustche Bahn.

TRANSPORT UNION RMT will be holding a rally to “Defend Rail Services, Safety and Jobs”  at the Mechanics Institute, 103, Princess Street, Manchester on Thursday 31st March 2016 - the eve of the Northern franchise handover to German-state operator Deutsche Bahn. The rally, supported by RMT’s sister rail unions ASLEF and TSSA, kicks off at 18.00hrs.

The Speakers at the RALLY will be:

The rally will be followed up on Friday 1st April 2016 - the first day of the Arriva (DB) Franchise – with the widespread distribution of special leaflets - highlighting the rail privatisation franchise fiasco and the nonsense of  German state operator DB taking over Northern Rail services with the threat of Driver Only Operation, and the sacking of the guards, to rail safety, jobs and front line passenger services.

Rail unions will be handing the leaflets to passengers on Friday 1st April 2016 outside:

A ceremonial German State flag will be raised outside the stations during the protests symbolising the nonsense of the Government opposing British state ownership of our railways while allowing the German state to bleed our franchises dry.
RMT General Secretary Mick Cash said:
“This rotten Tory government, opposed to British public ownership of our railways, have now awarded the Northern franchise to the German state railway company giving them the opportunity to bleed away millions in profits to subsidise their domestic operations.

“Since 2007 Northern Rail has sucked passengers dry to pay £179 million in dividends to the previous franchise owners Serco and the Dutch state railway.

“A German Transport Ministry spokesperson admitted to such a strategy in reference to its state-owned company Deutsche Bahn, which will now be running Northern Rail services saying:  “We're skimming profit from the entire Deutsche Bahn and ensuring that it is anchored in our budget - that way we can make sure it is invested in the rail network here in Germany.”

“That is nothing short of a national scandal and according to Rail North’s own estimates passenger demand for the North’s railway will soar by 50% over the next fifteen years opening the door to even greater profiteering while at the same time threatening to axe safety-critical guards from 50% of the Northern routes.

“To add insult to injury, at a time when train building in this country is struggling to survive, the German State operator has announced their intention to order new trains for the franchise from a manufacturer in Spain.

“Something needs to be done – we need a nationalised People’s Railway for the North.”