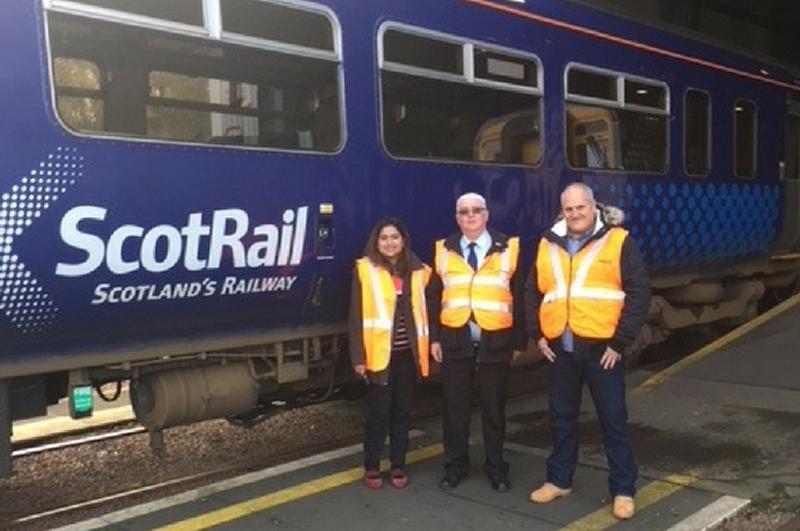 Following a high profile and hard hitting political and public campaign led by RMT coordinators at Scotrail Jim Gray, (pictured centre) and Dane Smith ( pictured on the right) and Network Rail the Scottish Government and Abellio Scotrail put in additional resources to significantly speed up and bring forward the programme of works to end the dumping of raw sewage onto Scotland’s rail infrastructure. The programme will now be completed by December 2017. 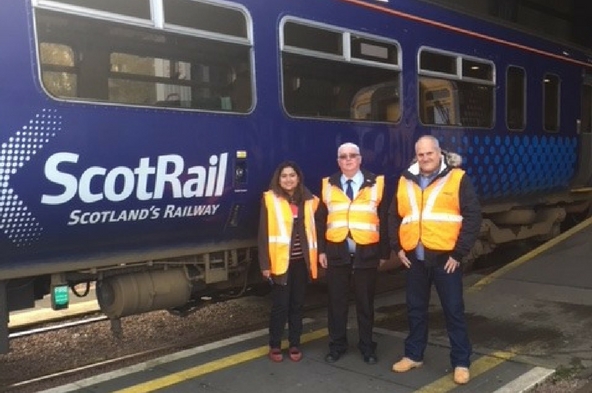 “ The completion of this work is great news for the RMT members employed at Scotrail in the engineering department as they will no longer have to deal with human waste spread all over the undercarriage of the rolling stock while undertaking their duties.”

“ RMT infrastructure members at Network Rail and at contracting companies have had to endure the infrastructure being contaminated by human waste for far too long and I am delighted this is now coming to an end in a few weeks time.”

Dane and Jim took the opportunity to thank Syeda Ghufran, Head of Engineering Projects at Scotrail ( also in picture) and her team for their diligence in keeping the programme on course on a tight schedule.

Jim and Dane hope the successful campaign in Scotland by RMT, and the actions of the Scottish Government and Scotrail will send a message to train companies and Governments elsewhere in Britain that a twenty first century railway must not tolerate nineteenth century methods of dealing with human waste.

"The union salutes the sheer hard work and determination of our reps in Scotland who have secured this important victory. They are an absolute credit to our movement and they have set the pace in terms of the fight to end the disgusting practice of dumping sewage on our railways.

"RMT's campaign continues and we will continue to challenge train companies in the rest of Britain to give us absolute guarantees that they will end this filthy scandal that shames Britain's railways once and for all. "