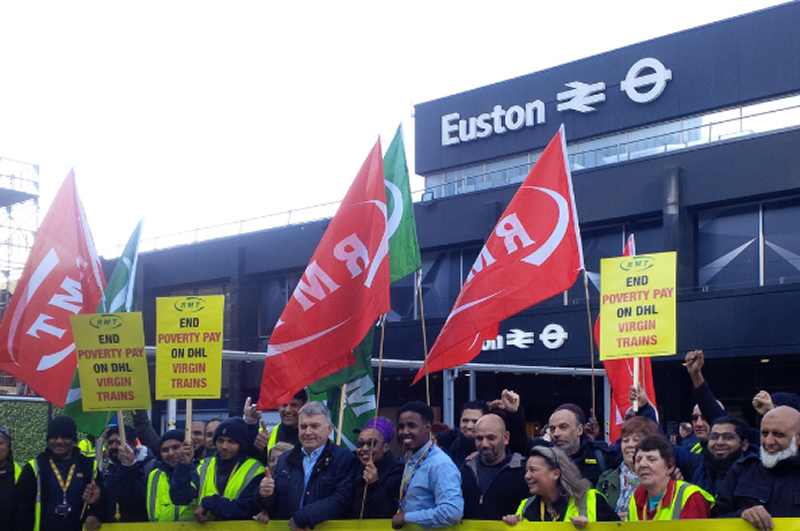 RAIL UNION RMT announced today that it has secured a major pay victory for members working on the DHL Virgin West Coast Mainline contract which will see the entire workforce lifted on to a living wage.

The new pay deal means that some staff will see their wages rise by over 21% and that a new base line level ensures that the DHL workers will be guaranteed a minimum rate of £10.55 for the London Boroughs and £9.20 outside of London.

RMT says that the pay breakthrough proves that outsourced workers, when organised into a militant, industrial trade union, can win major victories. The union believes that the 21% increase in pay for the potwasher grade is the biggest single rise in earnings secured by any trade union for any group of workers anywhere in the country in the current climate. Other groups of workers on the team will see their pay rise by nearly 19% as they are lifted onto the new minimum rates agreed with the union.

“This is a massive pay victory for our members employed by DHL on the Virgin West Coast Trains contract engaged in catering stores and supplies logistics for Virgin Trains.

“RMT has achieved a significant breakthrough here, our members showed a steadfast resolve in trying to achieve a better deal voting overwhelmingly for strike action in an attempt to get a better pay offer.

“RMT is pleased it didn't come to that but with a solid ballot result behind us for action RMT organisation, determination and serious negotiation has delivered results for this important group of workers.

“It's a huge win for our members – some of the lowest paid in London now move up to the real living wage from April - outside London we move beyond the real living wage. RMT had also been involved in an important grade restructuring that simplifies negotiations on pay going forward and recognises additional responsibilities and roles.

“RMT Euston Branch Secretary Kathy Mazur and RMT lead Staff rep Mustapha Kassim – working with Regional Organiser Craig Johnson - played a key role in securing the deal that the union believes is ground breaking and sets a new standard for rates of pay for staff whose roles have been contracted out.

“The solid strike mandate we had behind us was the foundation of our campaign for better wages for these low paid staff and gave us the leverage to secure huge improvements through serious negotiations with the company. This stunning deal sets a benchmark now for the whole outsourcing industry.”