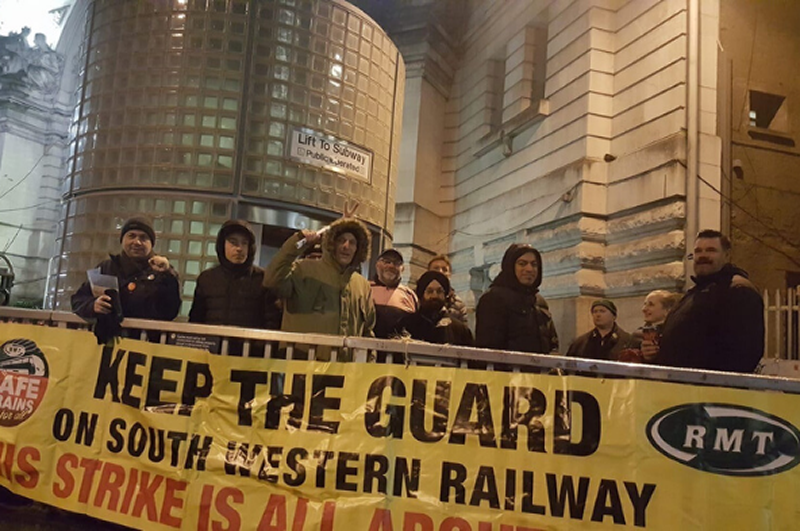 As the guards' safety strike on South Western Railway enters it's second week in the latest phase of action rail union RMT has set out a six point road map to a settlement.

The plan, which the union intended to table at renewed ACAS talks that the company scuppered at the end of last week, shows just how achievable a settlement is if the company agrees to add a few seconds to the despatch time in the interests of safety and accessibility;

1. That there will be an active safety critical guard on every passenger train in service.
2. That guards will retain their safety critical competencies including an active role in the safe dispatch of trains.
3. That as far as practicable every station and train will be 100 per cent accessible for passengers with guards playing a role in the accessibility of services for all passengers.
4. SWR will guarantee the role of the guard until the end of the franchise and seek DfT commitment beyond the life of the current franchise.
5. That it is feasible to create an optimal method of dispatch in which the guard has an active and defined role as well as being able to provide passenger assistance.
6. RMT recognises the company’s ambition to reduce station dwell times to an appropriately efficient and safe time. The current difference between driver-only and active-guard is 3-4 seconds and RMT will work with the company on this issue. This will include implementation of driver releasing doors and future implementation of Automatic Braking-Door Open (ABDO) system.

"As our members stand solid and united with this phase of SWR strike action entering it's second week we are literally three seconds away from a deal that would achieve both our objectives and the companies and I would appeal to SWR to get out of their bunker and back into ACAS with the union to bolt down a settlement.

"A negotiated solution to this dispute which would cost the company nothing and meet RMT's objectives of protecting safety and accessibility is within grasp. I would urge SWR to seize this opportunity".