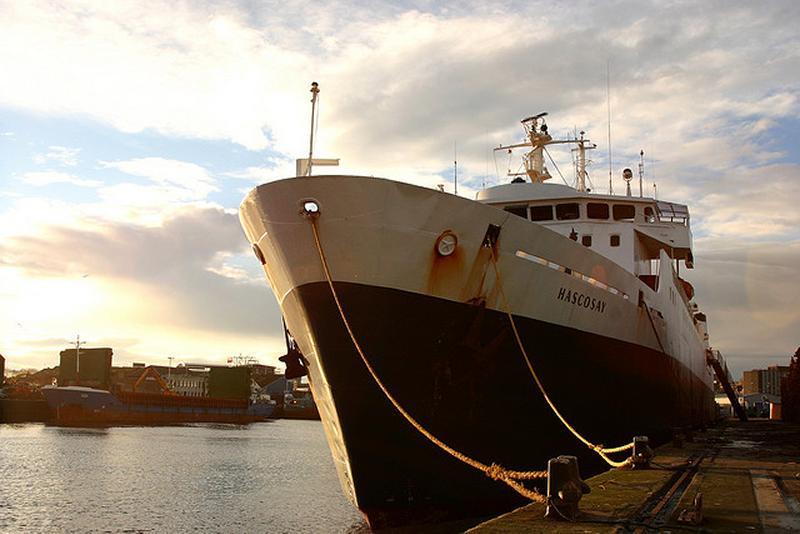 European Union regulations restricting the sulphur content of marine fuels to 0.1% are due to come into effect in the North Sea and Channel from 1 January 2015. These are required under laws agreed in 2005 by the International Maritime Organisation. The EU gave notice of the planned sulphur cap and the deadline for introduction to industry and European Governments in 2008.

Shipping union RMT today slammed what it describes as “blatantly alarmist” noises coming out of the shipping industry which threaten to destabilise the already damaged sector and which pose a renewed threat to seafarers jobs and training.

The Amec report commissioned by the Chamber of Shipping into the costs of new sulphur regulations is out of date. That report was published in March 2013 and priced conversion for companies at £300m. In the last 6 months oil prices have collapsed dramatically, one significant factor that escaped yesterday’s three-minute warning from the industry body. As a result, seafarers and passengers face an uncertain future after the sulphur regulations are introduced and Government should commit to making the release of any public subsidy to industry to meet conversion costs conditional on the protection of seafarers jobs and passenger fare levels.

“Threats of job and route cuts and fare hikes in the shipping industry make no economic sense when global seatrade is set to double over the next twenty years. The country cannot afford for UK seafarers and the maritime skills base to be shut out of the opportunities this presents and the Government needs to re-start the stalled Shipping Strategy to find effective ways of protecting and increasing UK seafarer numbers, rather than shipping companies’ profits. The number of UK ratings has fallen by 3,290 since 2011 alone and the shipping industry’s approach to the sulphur regulations must be seen by Government for what it is: a cynical attempt to wrest more subsidy from the taxpayer to meet conversion costs bound up with the austerity agenda of today’s autumn statement.”

“Seafarers, passengers and the national economy must not be forced to pay for the shipping industry’s failure to prepare for regulations introduced 6 years ago. New limits on the sulphur dioxide content of shipping fuel, required by international law, were announced by the EU in 2008 when the Chamber of Shipping welcomed them as “a major move forward’ as well as a realistic deadline. Some operators have taken preparatory steps and we recognise that but RMT cannot stand by and allow the shipping industry a free run at our members’ jobs on ferries and at ports in the North Sea and Channel. Leaving these alarmist statements to the eleventh hour is a crude ploy that causes unnecessary instability in the industry.

“In addition to the £725m tonnage tax break the shipping industry has enjoyed since 2008-09, the EU gave ferry companies in the UK nearly €30m [£23.7m] in July specifically to help with costs converting vessels to low sulphur fuel.”

1.    Full Chamber quote here, used by the former Shipping Minister in debate of sulphur regs of 18th June this year:

“The IMO’s proposal to progressively reduce sulphur emissions globally to the equivalent of 0.5 per cent sulphur content in all fuel by 2020, and in designated sensitive coastal areas to 0.1 per cent sulphur content equivalent by 2015, is a major move forward. These realistic deadlines also give the oil industry the time it needs to ensure that the required quantities of low sulphur fuel will be readily available.”

** Karl Turner: [215416] To ask the Secretary of State for Transport, pursuant to the Answer of 27 October 2014 to Question 211928, what recent progress has been made with the European Commission over the scope for State Aid in respect of ferry routes from the UK which are deemed to be vulnerable as a result of the new international and EU sulphur regime; and what his policy is on the linking of such provision to (a) employment and (b) training for UK-based seafarers.

Karl Turner: [215458] To ask the Secretary of State for Transport, pursuant to the Answer of 27 October 2014 to Question 211928, what funding has been secured to date from the Trans-European Network (TEN-T) programme to help shipping companies operating from UK ports to meet the cost of acquiring sulphur dioxide abatement technologies; and what proportion of such funding has been allocated to (a) each innovative technology and (b) infrastructure for liquefied natural gas bunkering to date.

Mr John Hayes: In July 2014, the Government’s support for shipowners and ports was successful in securing €29.5m of EU assistance under the TEN-T programme. All the projects received the full amount that they bid for. They are:

Ultimately, operators will make commercial decisions. The Government is aware that
there are ferry routes which industry considers are vulnerable, but this information is
commercially sensitive. We are exploring with the European Commission whether a ferry
route which is deemed to be vulnerable as a result of the new sulphur requirements
could receive State Aid – and, if so, the parameters on which it could do so. Those
discussions are ongoing.