RMT slams “all-out war” on rail in the North 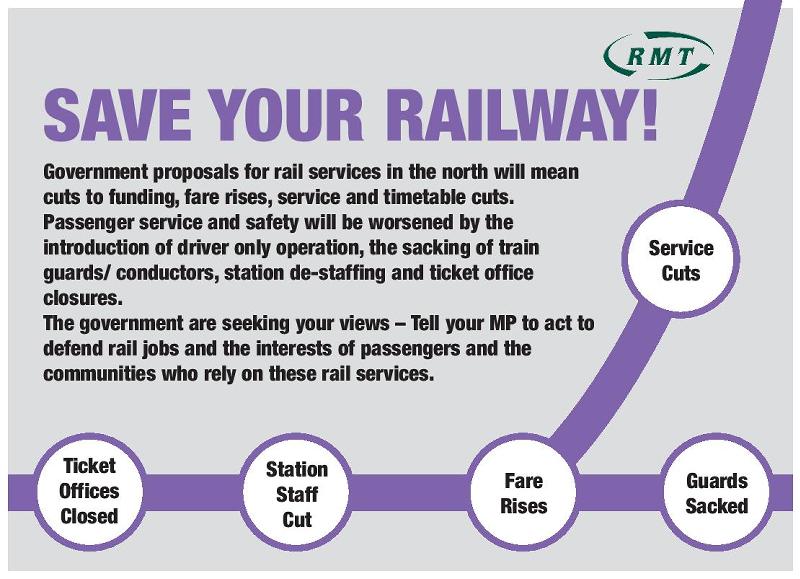 RAIL UNION RMT today slammed the Government for launching and “all-out war” on rail in the North as it emerged that they have dumped a flagship pledge to scrap the hated ‘Pacer’ trains. The revelation comes just a week after the close of consultation on the future of rail services on Northern and Trans-Pennine Express led to RMT delivering 10,000 postcards registering opposition to the Government’s cuts to jobs and services and also follows news that Northern are scrapping a wide range of off-peak fares in two weeks times.

The clapped-out 30-year-old trains were due to be replaced as part of the new franchise due to be introduced on Northern Rail by 2016, but the Department for Transport  has now been forced to admit that the Pacers may be “modernised” instead, to keep them running for at least another decade.

The latest attack on rail services in the North is bound up with the government’s shambolic fleet replacement programme which means that they have a chronic shortage of rolling stock to cascade through the network. Today’s move is a massive embarrassment for the Government, after it promised – in a Commons debate earlier this year – that the Pacers would go.

Stephen Hammond, the then rail minister, told MPs: “We expect to ask bidders for the Northern franchise to put forward proposals for the removal of Pacers from the area.” That pledge has been ripped to shreds as the Government are once again caught conniving with the private train companies to avoid investment in the name of maximising profits from the Northern routes.

The Pacers were supposed to be nothing more than a short term lash-up. Brought in as a stop-gap in the mid-1980s they consist of a bus body mounted on a freight wagon chassis and the Government’s ditching of its pledge to remove them means that they will now remain in service for another decade.

“The ditching of the pledge to replace the “Pacer’s” as part of the new Northern Franchise shows clearly, that despite all the rhetoric from George Obsorne, this Government are waging all-out war on rail passengers in the North. Taken alongside the abolition of off-peak fares, the axing of guards and the assault on services and ticket offices, there can be no other explanation.

“The end of the consultation  last week was just the end of round one in the fight to stop the carve up of jobs and services on Northern and Trans-Pennine Express. RMT is now preparing for the next phase which is ratcheting up the political pressure on these issues with the next election looming large on the horizon.