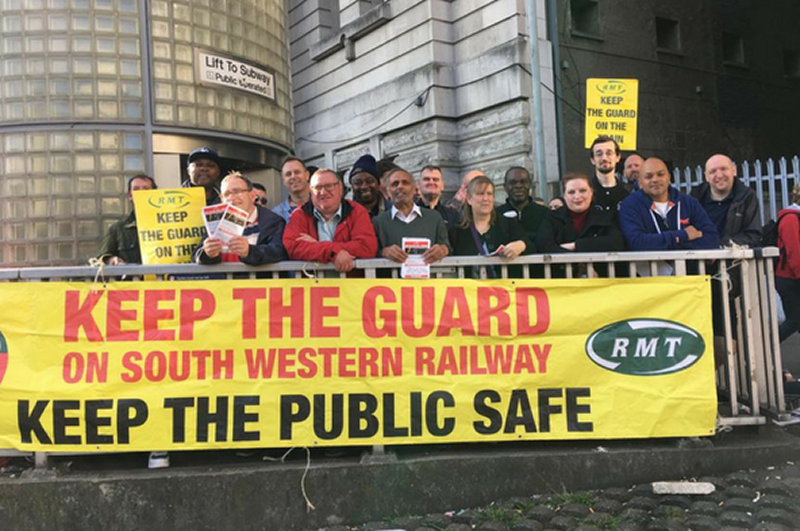 Rail union RMT said today that members are standing rock solid and united across the South Western Railway network this morning at the start of a 72 hour strike in the fight to retain guards and protect safety, security and accessibility on the companies services.

RMT General Secretary, Mick Cash said:
‎"RMT members are standing rock solid and united again this morning across South Western Railway at the start of seventy two hours of action in the campaign to put public safety, security and access before private profit.

“RMT is angry and frustrated that efforts by the union to get an agreement on the guard guarantee with South Western Railway bolted down has been repeatedly kicked back in our faces by a company that refuses to move the process on and address the fundamental issues.

"That is no way to treat a serious dispute that will impact on huge numbers of passengers throughout this weekend and SWR need to get out of this bunker mentality.

"Instead of winging it on passenger safety today by deploying well-paid and under-trained managers as bogus guards the company should be round the table working out an agreement that ‎puts safety first and keeps a real guard on our trains.

“Our members are striking today to put public safety before private profits and it’s about time SWR took note of what is going on elsewhere in the rail industry, and the settlements RMT has struck that underpin the guard guarantee, and started talking with us seriously around a similar package that puts safety, security and access to services top of the agenda."