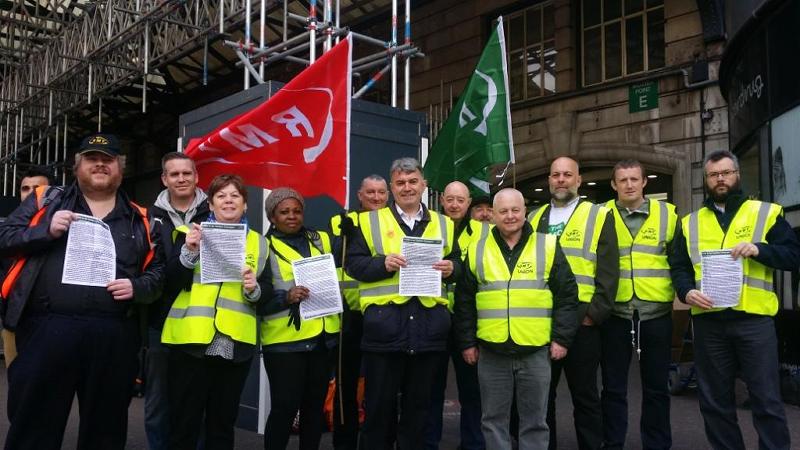 RAIL UNION RMT said today that industrial action involved hundreds of guards on Southern Rail, which kicked off at 11am, is rock solid across the franchise with pickets out in force at all key locations.

The union is distributing information to the general public at stations across Southern Rail setting out the three core issues at the heart of the strike:

This morning, the travelling public have again been subjected to GTR Southern’s expensive and wholly inaccurate propaganda on the matter of the guards  and proposals to remove the safety critical role they currently perform. The GTR spin has been branded by the union as nothing more than a smokescreen designed to cover up the fact that this massively-unpopular franchise operator is once again looking to ramp up profit margins at the expense of the safety and quality of service to passengers who pay some of the highest fares on Britain’s railways to travel on overcrowded and unreliable services.

Mick Cash, RMT General Secretary, said:
“Our guards members on Southern are rock-solid and determined this morning as they begin this phase of industrial action in defense of the life-or-death services they provide for the travelling public and against cash-driven cuts that would see those services hacked to ribbons.

“Let us be crystal clear – this dispute is about safety and the safety-critical role of the guards on Southern trains. The company, with an eye on ever-fatter profits, is prepared to axe the guards on some of the most overcrowded and potentially-dangerous services in Britain so that they can squeeze every last penny out of their passengers regardless of the consequences. That is a lethal gamble with safety in the name of profit and that is why we have been forced to take strike action today.

“The company have now resorted to trying to bully and intimidate staff taking a stand to defend the safety-critical role of the guard. That is disgusting but nothing surprises us with this mob. The union stands firm and united in today’s action and we urge the public once again to support their rail workers. Our job is your safety.”

We spoke to Paul Cox from @RMTunion ahead of the #southernstrikes - here's what he said...pic.twitter.com/yDsAKstwRM