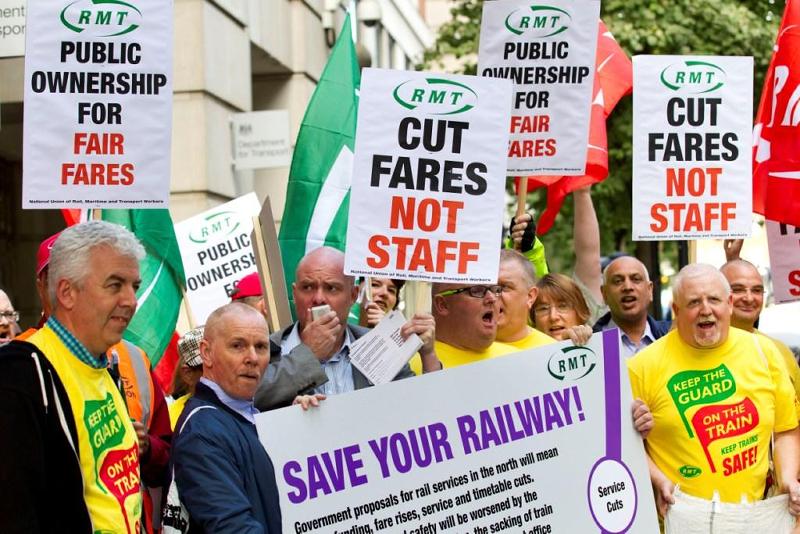 RAIL UNION RMT is stepping up its Christmas campaign against the Northern and Trans-Pennine Express franchise carve up as it was confirmed that the union has secured a major victory over cuts to services and as Durham and Doncaster become the latest local authorities to line up against the Government’s proposals.

As a result the union has committed to re-doubling the fight to defend other Trans- Pennine routes still under threat - those services to Blackpool, Scarborough, Barrow-in-Furness and Windermere are crucial to the passengers and communities they serve and the overall economy of the North of England.

In the past few days RMT has received confirmation that the big local authorities in both Durham and Doncaster have become the latest the back the campaign against the Northern and TPE franchise threats to jobs, services and safety.

Out on the streets the Chritsmas offensive, gathering support from the public, continues. The latest schedule of events is set out as follows, with RMT promising lively demonstrations and post-card distribution as part of the union’s on-going campaign.

RMT has also pointed out the rank hypocrisy of Government ministers, particularly Chancellor George Osborne, talking up plans for a “Northern Powerhouse” in his Autumn Statement and for an un-costed and vague proposal for a northern “HS3” service, light years off in the future, while at the same time their current franchise plans on existing routes would rip apart services, jobs and safety.

“The big news on the fight over the future of rail services across the entire North is that we are winning. The victory over the Cleethorpes and Manchester Airport route is entirely down to the hard work of RMT members and their supporters and proves conclusively that campaigning wins. We also welcome the important strategic support of local authorities in Durham and Doncaster who have joined a growing number of councils backing this fight.

“While George Osborne has been spouting yet another stream of rhetoric about a “Northern Powerhouse” in his autumn statement, RMT activists and our supporters in the community will be out in force across the region marking “12 Days of Christmas” with a renewal of our fight against the rail franchise carve up. We may have won on one important route but the wider battle is far from over.