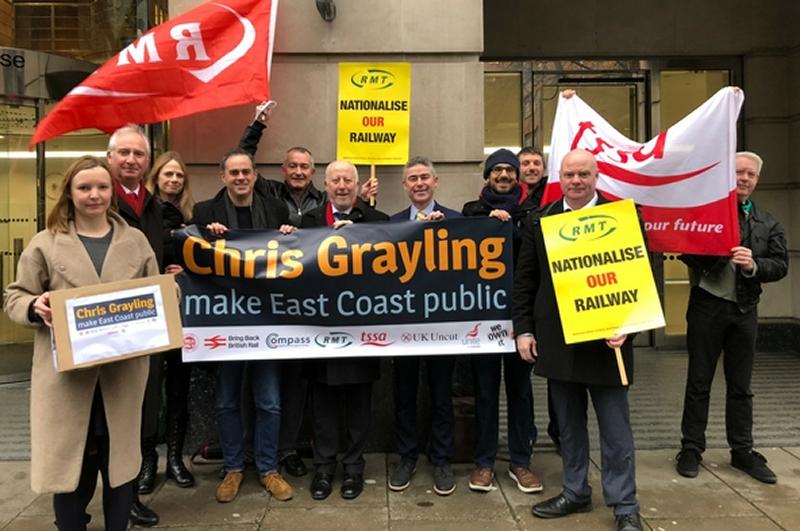 A petition – supported by rail union RMT – calling for failing Virgin Trains East Coast to be brought into public ownership is being handed in today – 20 Feb – as a government decision on the future of the franchise appears imminent.
Activists will be meeting at 8:15 am at the Department for Transport (Great Minster House, 33 Horseferry Road, London, SW1P 4DR) to hand the petition in.

RMT has been reliably informed that the government announcement on Virgin/Stagecoach has been lined up ready to go and could well coincide with the handing in of the petition today.

The petition - initiated by campaign group We Own It- calls for Transport Secretary Chris Grayling to not bail out East Coast by handing over more funds to profiteers, but instead bring it into public ownership.

The petition states that:
“Virgin Trains East Coast, run by Stagecoach and Virgin, has failed. Now, Chris Grayling, the Transport Secretary, says he will give in to their demands and bail them out to the tune of £2 billion. East Coast was run successfully in public ownership from 2009 to 2015 after the last private company failure – but  then it was reprivatised. 76% of us want public ownership and it would save us money.

RMT General Secretary Mick Cash said:
“The privatised East Coast Main Line has failed the travelling public and it has failed the workers who operate it. It has been a disaster from day one and has exposed once and for all the racket of rail privatisation in Britain.

“There are RMT members on the job today who have gone from British Rail, to GNER, to National Express, to Directly Operated Railways, to Virgin/Stagecoach and who are now left wondering who their sixth employer will be in little more than two decades on this vital section of Britain’s rail network.  That is a shameful way to treat the workforce and shines the spotlight on the continuing chaos of rail privatisation.
“Today’s petition called for a simple and sensible solution. End the fixation with the spivs and speculators from the private sector and bring the whole lot back in house, on a permanent basis, with immediate effect.”

The petition can be found at https://weownit.org.uk/act-now/east-coast-public-ownership-petition

RMT calls for Grayling to go and an end to the shameful fiasco of rail privatisation The government may be forced into taking over the East Coast Mainline after admitting the Virgin-branded franchise was about to collapse. Earlier this month hapless Transport Secretary Chris Grayling told MPs that Stagecoach, which operates the line in conjunction ...