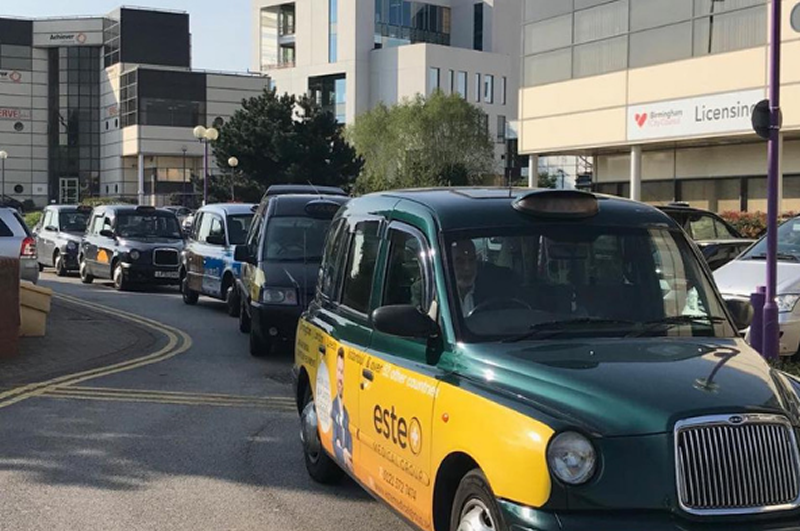 RMT taxi drivers will be protesting again in Birmingham today and for the foreseeable future after the Council scrapped planned talks aimed at reaching a solution to the long going row over the bulldozing through of policies that would decimate the licensed taxi trade in the City and the standards of living of those involved in it.
For the last two weeks, RMT members who are taxi drivers in Birmingham have been engaged in protest action in an attempt to persuade the City Council to re-open talks on how the financial impact of the councils policies could be mitigated so that the taxi drivers would not be plunged into greater financial hardship.

On 2nd May 2019 the RMT Midlands Regional Council President received a communication from Councillor Barbara Dring indicating she would be prepared to meet with the taxi drivers for further discussions at 9am on Tuesday 7th May 2019 - this was on the basis the taxi drivers suspended their protests which they duly did.

However , just 24 hours later RMT’s Regional President Raja Amin received a further email from Emma Rohomon - the acting head of licensing at Birmingham City Council advising that no changes could be made to anything and that no one from the council would be attending any meetings – affectively wrecking todays talks before they even started.

Further protests are planned as follows :-

RMT General Secretary, Mick Cash said:
“It is a scandal that today’s talks have been cancelled leaving our members angry and frustrated.

“RMT taxi drivers will be protesting again today and calling for meaningful negotiations to be put back in place and alterations to the proposals that seek to address the issue of pollution in the city.
“We want to see a fair deal for taxi drivers whose livelihood would be affected by the proposals.”