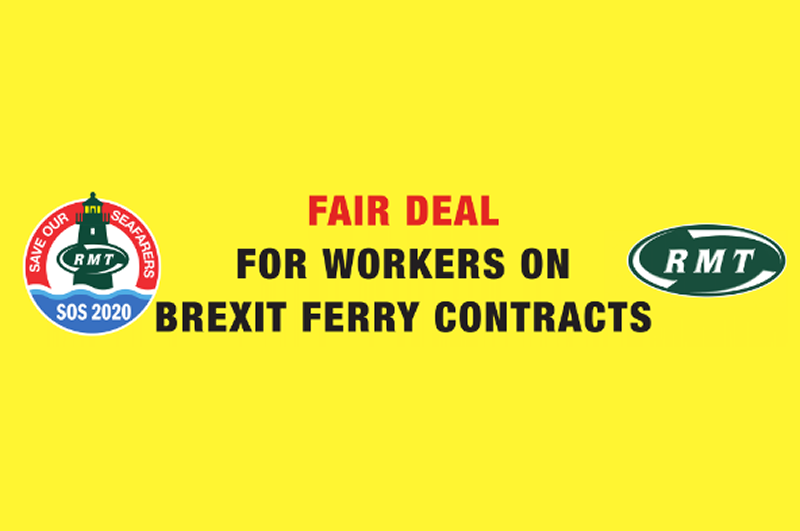 RMT to take demands for a fair deal for workers on Brexit ferry contracts direct to Chris Grayling tomorrow as government chaos deepens.

Maritime union RMT will be taking the demands for a fair deal for British workers on Government Brexit ferry contracts direct to Transport Secretary Chris Grayling tomorrow as Government chaos over arrangements deepens and the Maritime Minister dismissed union concerns in what RMT has described as “an insulting and contemptuous tirade of abuse towards the front-line ferry workforce.”

When asked a direct question yesterday in an urgent debate on the Brexit ferry services Chris Grayling would not commit to the new Government-contracted services being crewed by UK seafarers – fuelling union fears that once again they will be staffed up with low cost foreign nationals working on shoddy, unsecure conditions and paid below prevailing minimum wage rates. (details of the debate below).

RMT will be holding a protest outside the DfT at 10am on Friday 11th January (Department for Transport, Great Minster House, 33 Horseferry Road, London, SW1P 4DR) setting out the following three core demands on the Government contracts:

1. All ferries to be fully crewed up with UK ratings‎.
2. Recognition of UK trade unions.
3. UK employment laws to be fully complied with.

The RMT protest comes after a slew of publicity around the Seaborne Freight contract awarded at public expense by Chris Grayling to a company with a shocking back-story, the on-going dredging of Ramsgate Harbour and new reports of serious problems for the rail network as the Government triggers a series of rail-freight panic measures.

The only response RMT has received so far to its serious concerns is a childish outburst from Nusrat Ghani, the Government Maritime Minister, who has chosen to ignore the issues and fire off an insulting and contemptuous tirade of abuse towards the front line ferry workforce at this critical moment for the industry.

“There has been a barrage of publicity around the Government’s Brexit ferry contracts and the union has written to both Chris Grayling, who is in control of the arrangements, and the companies involved demanding basic assurances on UK ratings jobs, union recognition and full compliance with UK employment laws. The only response we have had back so far is an insulting and contemptuous tirade of abuse towards the front line ferry workforce form the Maritime Minister.

“RMT has no intention of allowing any backsliding, or any stitch-ups of UK seafarers, and that is why we are making our position public with the protest at the Department for Transport on Friday morning. We will not allow the scandal of the Ships of Shame in British waters, where poverty pay below the minimum wage and shocking working conditions are endemic, to roll over to these contracts.

“Under RMT’s SOS2020 campaign banner we have been fighting for a fair deal and increased employment opportunities across the UK maritime sector. We will taking that message direct to Chris Grayling in the wake of his Brexit contracts on Friday. We expect him, and the companies he has contracted, to meet our demands in full as a matter of urgency and to start taking the issues we have raised seriously.”

Grahame Morris (Easington) (Lab) Any members of the public watching this debate will be absolutely amazed. They will think it is bizarre that we have a Transport Secretary who signs a shipping contract with a shipping company with no ships. Given that the company is going to hire in ferries, does he have any idea what plans it has to crew its ferries and whether UK crews would be used?

Chris Grayling There is a complete lack of understanding of business models on the Opposition Benches. Opposition Members should understand that when they go on holiday next summer there is a fair chance they will be flying with an airline that owns no planes. The reality is that transport operators do not always own their own assets; they contract or charter them in and they operate the service. I do not think that Opposition Members understand that. As to the crewing of the ships, that is a matter for the company itself.