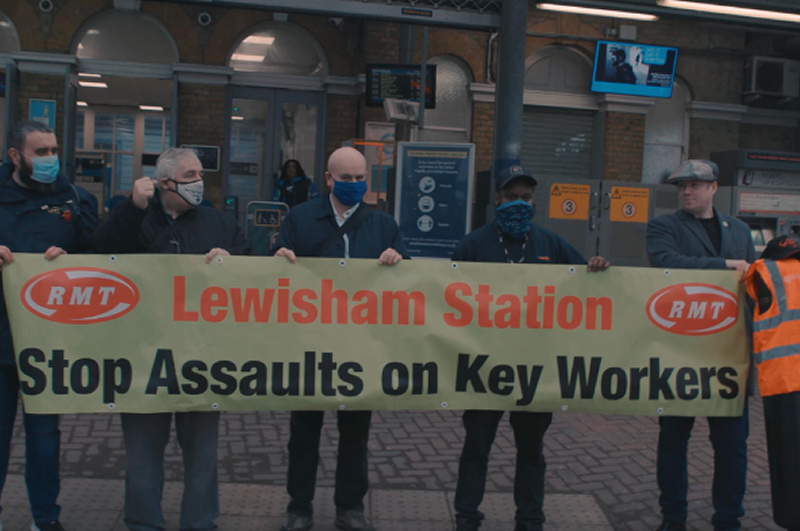 RAIL UNION RMT is holding a protest outside Lewisham rail station this morning demanding urgent action in the wake of a surge of COVID-related assaults on staff.

In one incident alone last month a member of staff was spat at in the face and two others verbally abused and threatened by a man who was vandalising the station. This is the second time the worker has been spat at and the third time he has been assaulted, leaving him terrified of returning to work.

The incident is merely the latest in a long line of violent assaults, threats, racial abuse and intimidation that staff report happens on almost a daily basis. The union says that the appalling situation at Lewisham is just more evidence of why transport workers should be given the priority and protection that they so clearly deserve in the midst of the COVID pandemic.

RMT has issued a series of demands from station operator Southeastern:.

· current weak risk assessments are shredded and replaced with ones that are strengthened and take into account the risk of assault
· the company takes appropriate steps to protect staff, including the request of an additional British Transport Police presence
· the company provides proper chain of care following incidents
· an end to lone working in the station which leaves workers vulnerable
· prominent publicity campaign and announcements at the station publicising zero tolerance to assaults

“Lewisham rail staff are demonstrating outside the station this morning to highlight the serious issue of COVID-related assaults and call on station operator Southeastern to take steps to protect to staff. It is a disgrace that frontline workers at Lewisham station have to go to work wondering if they will be spat at or face some other assault.

“We are also calling for an end to lone working in the station which leaves workers both in fear and vulnerable.

“The union will also today be reaffirming advice issued to our members at Lewisham station on personal safety including to “safe stop” and walk off the job if they assess they are at risk of assault.”