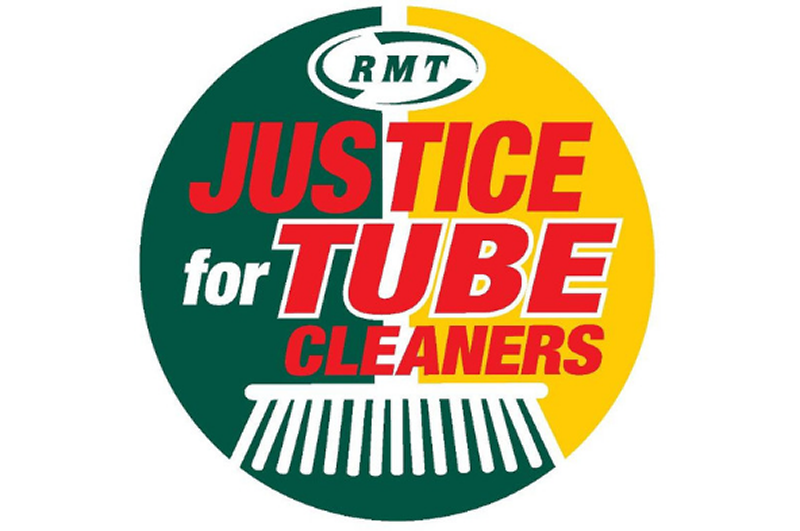 A new report by Tube union RMT released today at a demonstration outside Parliament, with the support of MPs, shows London Underground cleaning staff believe US owned corporate giant ABM, which is responsible for cleaning the Tube, is putting profits before passengers and is engaged in widespread discrimination against cleaning workers.

The demonstration will take place on Wednesday 29 January at 13:00 opposite Old Palace Yard at the Houses of Parliament.
The London Mayor, Sadiq Khan, handed the multi-million-pound five-year cleaning contract, employing 2000 cleaners to ABM in 2017.

The Mayor has launched a consultation on his policies for his next term which closes this Friday. In advance of that MPs have tabled a motion in parliament supporting RMT’s call for Tube and London Overground cleaning to be taken in-house and into public ownership.

The report, titled ‘Dirty Work: ABM and the outsourcing of London’s Underground cleaners’, shines a light on the unknown world of the 2000 workers who keep the Underground clean and hygienic for the 2 million passengers who use it every day.

Partly based on a survey of ABM cleaners, the report shows that:
• More than one in three cleaners said they had been treated unfairly at work or by their employer because of a characteristic they have (such as race, religion, gender, age, or sexual orientation)
• 68% said they believed their employer put profits before working conditions or passenger concerns
• 68% said that they sometimes or regularly struggle to make ends meet;
• 76% said that they believed passengers would benefit more if their jobs were brought in-house;
• 91% said they would rather be employed in-house.

RMT General Secretary Mick Cash said:
“As in so many other sectors London Transport cleaners are the hidden hard-working workers struggling to get by and still battling to do their jobs properly while the private companies that employ them cut corners in search of profits.

“This should not be happening under a Labour Mayor and this report should be a wake-up call for Sadiq Khan to end the scandal of cleaning privatisation on London Underground and London Overground and bring these workers in- house.”


Notes for Editors
The report can be downloaded at https://www.rmt.org.uk/news/publications/dirty-work-abm-and-the-outsourcing-of-londons-underground/?preview=true

Early Day Motion
The Early Day Motion tabled by MPs is below and can be found at https://edm.parliament.uk/early-day-motion/53526/outsourcing-of-tfl-underground-and-overground-cleaners
Outsourcing of TfL Underground and Overground cleaners
EDM #71
Tabled 16 January 2020
2019-20 Session
That this House pays tribute to cleaners employed on London Underground and Overground who keep the capital's transport network clear of obstructions, and maintain it in a hygienic state while working unsocial hours in dirty and hazardous conditions; notes that Transport for London continues to use outsourcing companies ABM and Vinci to employ cleaners on London Underground and the Overground rail network; notes with concern that a recent RMT survey of ABM cleaners revealed that the overwhelming majority struggle to make ends meet on low pay, have far worse working conditions than directly employed staff and believe that ABM puts profits ahead of passenger and staff concerns; further notes that the overwhelming majority of cleaners want to be directly employed and brought in-house and believe that bringing all cleaning staff on London's Underground and Overground network in-house will help improve working conditions for this vulnerable group of workers, improve the quality of service for passengers and represent greater economy and efficiency; and urges the Mayor of London to commit to bringing these workers in-house and to convene a working group with the RMT union and other stakeholders to discuss how this can be achieved.