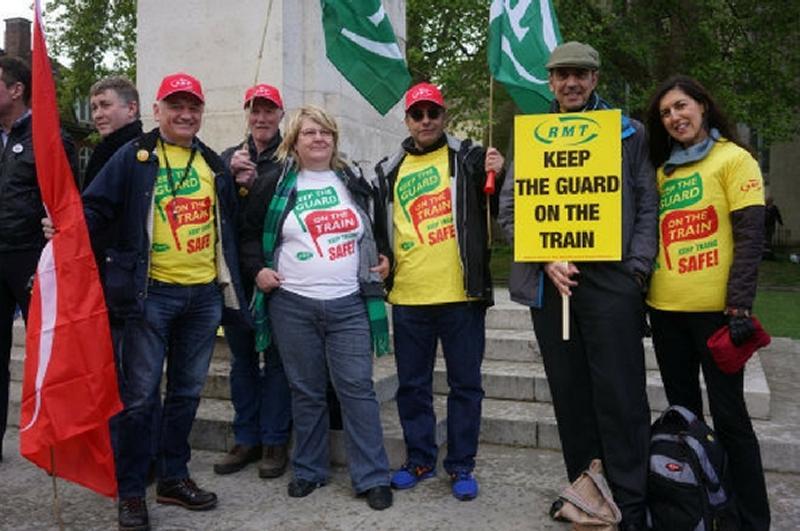 On day of third anniversary protest in fight for the guard RMT warns of “mass transport discrimination” against disabled passengers on Southern Rail services.

On the day of the third anniversary protest in the fight to keep the guard on the train, rail union RMT has revealed that at least 15,000 Southern Rail services have run without a second person on board since the introduction of driver only operated services in 2017, according to new figures provided by official parliamentary answers.

With the majority of Southern stations unstaffed RMT has warned that mass discrimination is taking place against older and disabled passengers who now no longer have the guarantee of a second member of staff to assist them, including being table to turn up and go and travel on the train of their choice.

The Equality and Human Rights Commission has recently warned that:

“We believe that the shift to DOO trains, with the increased likelihood of there being no second member of staff on board to assist passengers, and a decrease in staffed stations could represent a diminution of protection for disabled people, and potentially be a breach of the Equality Act 2010.”

Although the figures were provided by the Department for Transport on the basis of figures reported to them by Southern, the standard of reporting has not been assessed by the equality rail regulator the ORR, and the union fears the situation is far worse.

The shocking revelations have come as RMT and disability campaigners and supporters are to protest at midday today outside the headwaters of French state owned Keolis, which owns 35% of Southern franchisee Govia.

The protest coincides with the 3rd anniversary of the start of RMT strike action on Southern Rail – Britain’s longest running industrial dispute – against Driver Only Operation. Speakers at the event include Shadow Chancellor John McDonnell MP. It will take place from 12:00 outside Keolis UK, Evergreen Building North, 160 Euston Road, London NW1 2DX.

“Three years on in the fight to keep the guard on Southern Rail trains the shocking reality of the scale of discrimination against disabled passengers is laid bare this morning. As we protest today at the company head office those responsible should be hanging their heads in shame.

“Despite all the promises that there would continue to be a second person on trains, Ministers have now admitted thousands of Southern services are running with a driver alone. With Chris Grayling’s record of deceiving passengers, the situation is likely to be even worse than they are prepared to admit and it's time for the truth to be told.

“And as Southern is ultimately part -owned by French state railways, French services are benefiting off the backs of discriminatory cuts on Southern railways. This scandal has to end and end now and that means Southern reversing their Driver Only policy and signing up to the guard guarantee.”