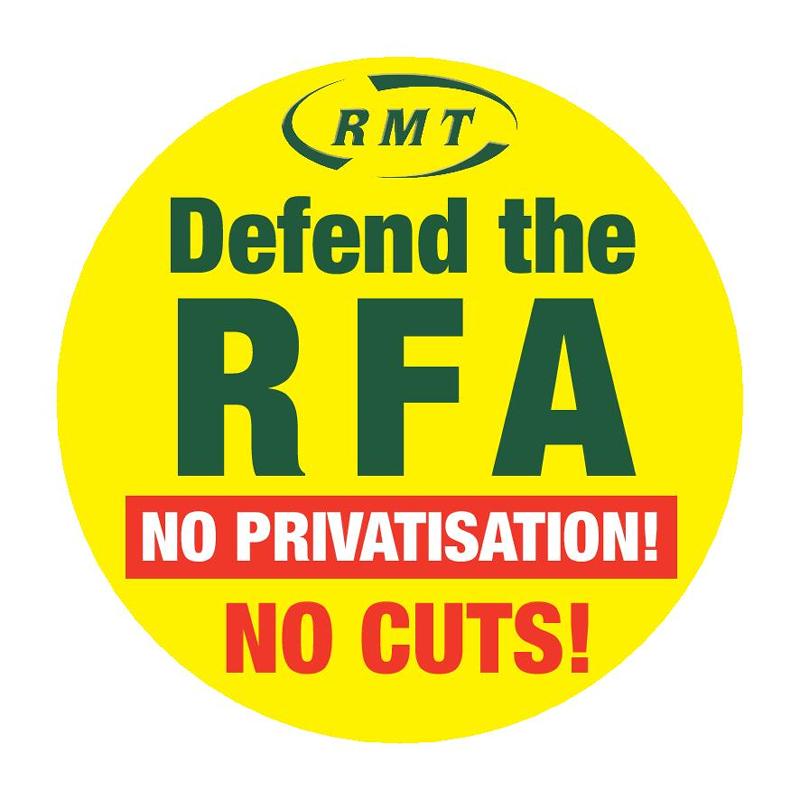 With speculation growing that civilian defence faces the prospect of the loss of up to 12,000 jobs from this afternoon’s Defence Review announcement, alongside a programme of privatisation, maritime union RMT, which represents staff across the Royal Navy supply lifeline, the Royal Fleet Auxiliary, has warned of the consequences of any attack on the organisation.

“RMT has fought off successive attempts by previous Governments to privatise the Royal Fleet Auxiliary but the Tories, as ever are threatening to go one step further and slash thousands of civilian jobs, including in the Royal Fleet Auxiliary which is the key to maintaining the UK’s international defence capability. Cutting or privatising the RFA would be a disaster for the UK’s security capacity at this dangerous time and for the future of UK merchant navy seafarers.”

“RMT will fight any programme of cuts or privatisation at the RFA if it emerges this afternoon that that is what the Government are planning.”

“RMT needs the full details of what this Government is planning but the timing of this announcement is not encouraging. The Government consultation over their plans for the UK’s future defence strategy only closed 10th November and the public should be made fully aware of the risk to the long term security of the UK from short term, rushed decisions over defence funding. Cutting civilian support to the military, including the Royal Fleet Auxiliary which is the largest employer of civilian UK seafarers would be a terrible betrayal of the country’s long term maritime security needs.”

RMT organises around 800 merchant seafarer ratings who work for the Royal Fleet Auxiliary (RFA), the civilian maritime service that supplies and re-fuels the Royal Navy fleet when operating overseas. The union welcomes the opportunity to submit views as part of the Government’s 2015 SDSR Review, particularly as we believe that the significance of the role of the RFA in delivering national maritime security objectives in the short and long term has been overlooked.

RMT is profoundly concerned at the impact that the long term decline in the number of UK seafarers working in the merchant navy and the reduction in the diversity of merchant shipping under UK ownership could have on national maritime security.

The shortage of UK ratings and officers is forecast to grow over the next decade, due to low training and recruitment rates and the demographics of existing UK seafarers. Around 60% of UK certificated officers active at sea are aged 40 or over. That proportion is even higher amongst UK deck and engine ratings, with around 75% aged over 40. This represents a serious recruitment and skills problem for the industry, as well as a significant strategic problem for the MoD in planning for the supply of a military taskforce or similar operation to protect national interests or those of Overseas Territories.

We note that the UK National Strategy for Maritime Security of May 2014 contains five core maritime security tasks: Understand, Influence, Prevent, Protect and Respond. The UK’s capacity to deliver each one of those maritime security objectives is directly linked to the nation’s maritime skills base and tonnage under UK ownership. RMT believe that the capacity to deliver each core task is impeded by the current condition of the skills base and UK owned merchant fleet.

RMT observe that neither the National Security Strategy nor the Strategic Defence and Security Review (the subjects of this survey) mention the impact that a continued skills and tonnage shortage in the UK maritime sector inevitably have on the national maritime security capacity. And the UK National Strategy for Maritime Security, published May 2014 does not analyse these maritime security capacity problems and only makes one passing reference to the RFA. Given that the RFA is the largest employer of Merchant Navy seafarers in the country and, as such, is directly affected by the shortage of UK seafarers in the wider shipping industry, this is a considerable oversight.

The Military Afloat Reach and Sustainability (MARS) Project’s 2012 order of four double hulled tankers from Daewoo of South Korea for the RFA’s replenishment at sea services was welcome, although we are concerned by the recent announcement of delays to the introduction into service of these vessels, particularly as two of the MARS vessels have yet to be built.

Furthermore, the union is mindful of repeated attempts over the last decade or so to privatise the RFA. RMT’s policy is to keep the RFA in the public sector and we call for the SDSR to reach the same conclusion. We have worked with our sister union Nautilus and Defence Ministers in the previous Labour Government to fight off Treasury driven attempts to privatise the RFA and stand prepared to do so again, although we are confident that a campaign to fight off privatisation of the RFA will not be necessary because neither the current nor future Government will go down that road.

However, morale amongst RFA’s merchant seafarers is declining due to a number of factors, including:

•    The 250 job losses amongst RFA seafarers through a voluntary release scheme in 2011 have not been replaced;
•    removal of the check-off facility to pay trade union subscriptions;
•    the number of RFA vessels (Black Rover, Fort Austin and Diligence) currently laid up in Birkenhead due to the lack of available senior engineer grades to crew the vessels;
•    the recent departure of Commodore Dorey after two years in post; and
•    imposition of the Future Development Programme (FDP) in April this year.
We should also state that the imposition of the FDP has tainted industrial relations in the RFA, not least because it has proved to be an inefficient and unfair method of allocating the same amount of work amongst a smaller number of crew.

As a result, merchant seafarers working for RFA have a growing sense of uncertainty over what the future holds for the organisation and their role within it.

It is vital, therefore, for the Ministry of Defence to make a clear commitment to maintaining and, if necessary, legislating to keep the RFA in the public sector.

The UK Merchant Navy should not be allowed to wither and die as a result of the aggressive commercial agenda of the shipping industry which seeks to cut the cost of crewing vessels by employing seafarers from outside the European Economic Area wherever possible. The security implications of this crewing practice and the knock-on effect on the RFA would be extremely serious for the UK if it is allowed to continue unchallenged. We are hopeful that the MoD’s future strategy will take greater cognisance of the importance of the RFA and the intrinsic importance of a health merchant maritime skills base and vibrant register of UK owned merchant fleet.