ScotRail: No to DOO events 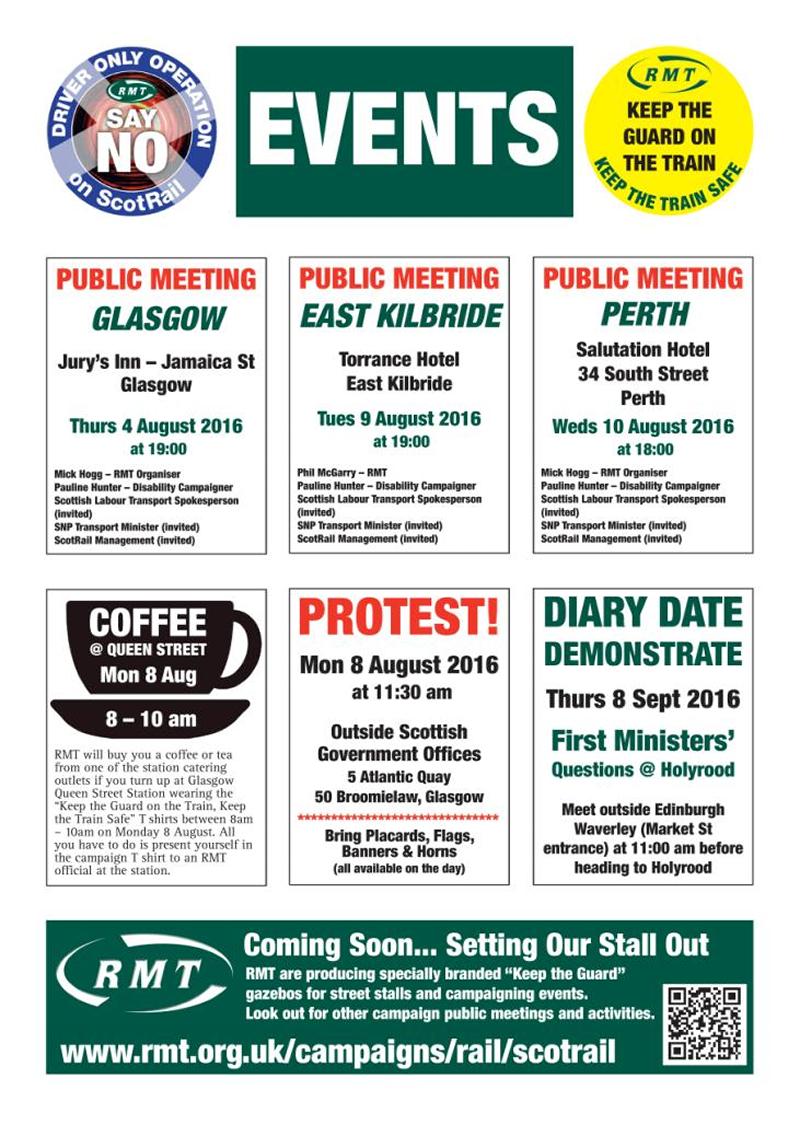 RMT ramps up public campaign activities on Scotrail over Driver Only Operation.

RAIL UNION RMT today announced a series of forthcoming public meetings and other activities in support of the campaign against Driver Only Operation on Scotrail.

Thurs 8 Sept 2016 – Demonstration outside First Ministers’ Questions, Holyrood. RMT are assembling at Edinburgh Waverley at 11:00 am before heading to Holyrood.

The activities follow a series of rock-solid strikes across Scotland by RMT, which have still not produced any movement on the core issues at the heart of the dispute. RMT has repeatedly attempted to engage in serious talks through ACAS but progress has been blocked as the company have tried to pick and choose issues and divide and rule the workforce.

Despite a barrage of misinformation from Abellio/ScotRail the issue at the core of the dispute is safety and the safety-critical role of the guard.

RMT’s policy is for no extension of DOO on any route or service and for the guard to be in full operational control of the power operated doors. Furthermore, RMT has made it clear that the union is totally opposed to any proposals for extending DOO, reducing or abolishing the safety role of the guard in the operation of the doors.

“RMT is organising a series of public meetings and other activities so the public can hear the truth about what is planned for Abellio/ScotRail as the safety and accessibility risks of moving to a de-staffed, faceless railway across Scotland become clearer by the day.

“We have had tremendous support from the Scottish public who are with us in wanting safety critical trained guards on their trains. These events will be an opportunity for us to show the strength of feeling from both staff and the travelling public who want to travel on a safe service.”