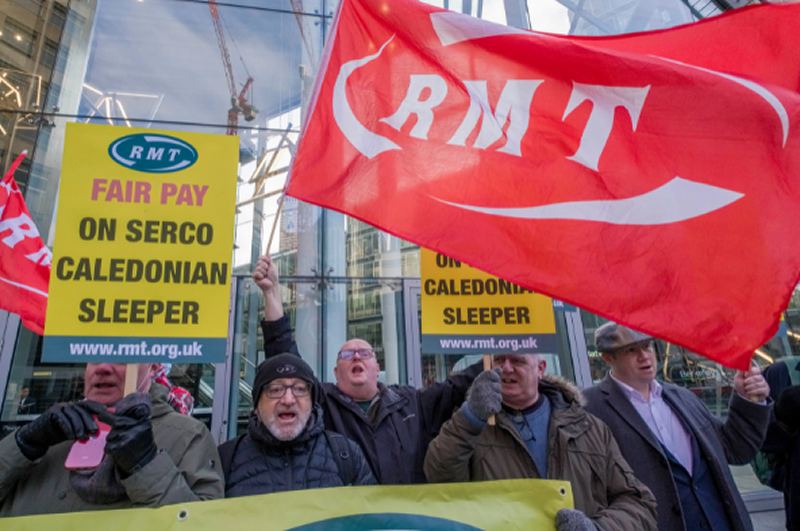 As the Scottish Government was challenged in parliament today over crisis on the Caledonian Sleeper with a call for ministers to take action over bullying and harassment of staff at the Company, a new survey of RMT Caledonian Sleeper members reveals that the majority have felt harassed by management in the course of their work.

When challenged on the issue today in parliament by Richard Leonard the Minister called on the operator Serco to investigate the matter.

The survey also makes clear that the company’s internal processes are failing to protect staff from bullying and harassment at work, with a massive 75% of members stating they do not feel confident that the company’s procedure on reporting bullying can deal with allegations effectively.

RMT has already entered into a dispute with Serco Caledonian Sleeper over the company’s failure to address concerns regarding bullying and harassment of staff and is today demanding that the Scottish Government, which is fully funding the franchise, meets with RMT as a matter of urgency to discuss measures to bring about an end to the damaging bullying and harassment culture that has become entrenched at Caledonian Sleeper.

“It is clear from the survey that Serco is presiding over a culture of bullying and harassment at the Caledonian Sleeper and RMT has serious concerns about the impact of this on our members safety and welfare.

It is also apparent that Serco’s internal policies have failed to address tackle these serious issues, and the overwhelming majority of RMT Caledonian Sleeper members do not have faith that any allegations they make will be taken seriously by the company.

The Scottish Government is fully funding the franchise and as well as calling on the company to investigate the matter as it has today Ministers need to take urgent action to hold the company to account for the culture of bullying and harassment that has developed at Caledonian Sleeper. Make no mistake RMT will take all steps necessary to protect the safety and wellbeing of its members at Caledonian Sleeper.”

Richard Leonard has today this morning asked a question in the Scottish Parliament about the Caledonian Sleeper franchise. In response to concerns about bullying and harassment, the Minister said he encouraged Serco to look into it in great detail.

The survey of RMT Serco Caledonian Sleeper members was carried out between 18th November 2021 and 1st December 2021. The full results are:

Some comments provided in the survey include:

“There are unrealistic expectations placed on us regularly. If we can't carry out the impossible we are subject to harassment on a regular basis.”

“On more than one occasion I've been subject to harassment from management.”

“I witnessed hosts' and team leaders' line managers intimidating and shouting at on train staff for no good reason. Union reps seemed to be particularly targeted.”

“Yes, I have witnessed staff members being harassed by management in the past even for the most mundane things.”

“All grievances or reports of bullying are done in house by management therefore allegations towards management are never upheld. You will then be in a position where you could in turn be singled out and victimised for this”