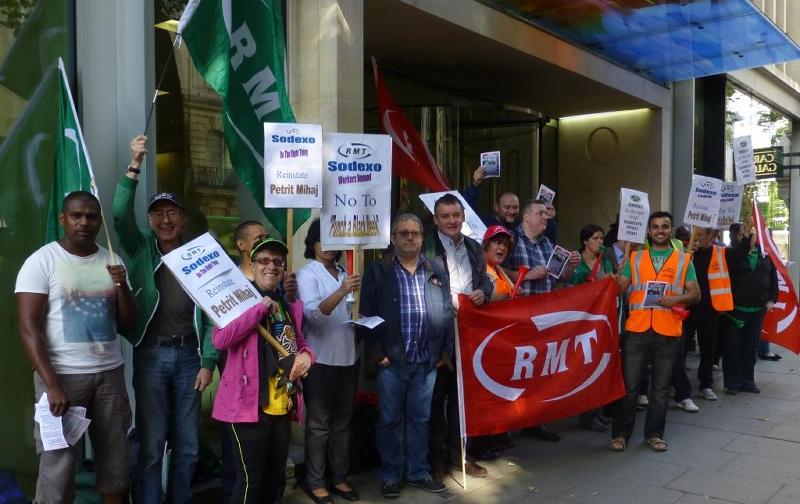 Campaigners and trade unionist fighting the victimisation and dismissal of RMT union activist Petrit Mihaj took the fight against global union-busters Sodexo to the front door of the company’s London headquarters this morning with a solid and lively turn out distributing hundreds of leaflets to members of the public as the campaign for Petrit’s reinstatement builds throughout the trade union movement .

Petrit has been a major force in building union organisation on the LUL Sodexo depot catering contract and has been instrumental in securing union recognition and delivering improvements in pay and conditions and effective representation of staff. An Employment Tribunal has already ruled that Petrit’s dismissal was 100% unfair and that he was sacked for his trade union activities but under the UK’s notorious anti-union laws the company are under no obligation to reinstate him to his original job.

RMT has had no option but to begin a campaign of industrial action and public protests to secure workplace justice and a return to work for Petrit Mihaj.

Sodexo itself, one of the Government’s favourite private contractors, has a long, worldwide form sheet when it comes to union bashing and treating its workforce like dirt.

“It is shameful that a company like Sodexo, with its shocking track record of racism, bullying and union-busting, are allowed to win Government and London Underground contracts. That is the message that we took to the front door of Sodexo’s London headquarters this  morning along with the call for the reinstatement of our colleague Petrit Mihaj.

“Petrit has stood up for the union and for his colleagues and it is only right that the entire RMT organisation, and the rest of the wider labour and trade union movement, stands shoulder to shoulder with him now that he is being attacked and victimised. Petrit’s fight is part of the global battle against these bullying, union-busting facilities companies who are hoovering up multi-million pound public contracts while treating their staff like dirt. They should be banned from public works, as the law allows.

“This is the most blatant and clear-cut example of victimisation and dismissal on the grounds of union activity that it is possible to imagine – a fact backed up by the Employment Tribunal. It is due to the anti-union and anti-worker laws in this country that we have to continue to campaign for the reinstatement of Petrit Mihaj and in defence of strong, fighting union organisation at Sodexo and other facilities company’s out of the same mould.”