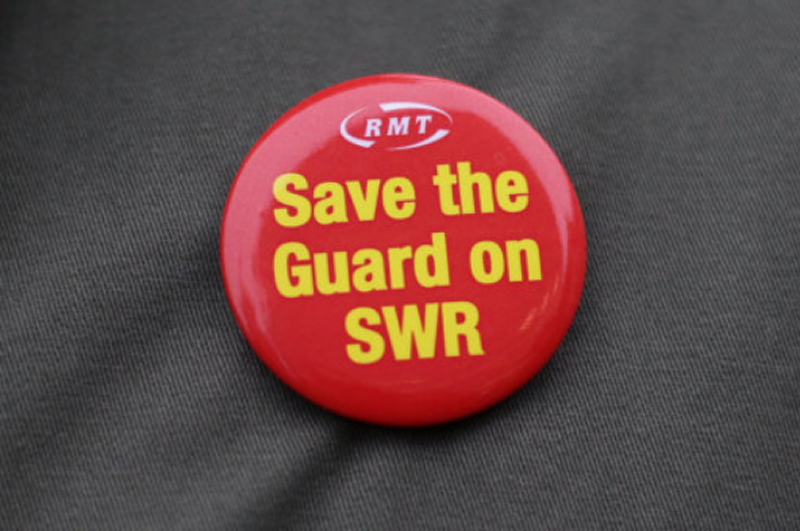 On the eve of South Western guards taking four days of strike action to defend safety it has been revealed the company is set to receive at least a £32m strike bailout from the taxpayer for strike action taken to date, meaning they will be paid by the Government even when they have not run trains on strike days.

In response to Parliamentary questions the new Secretary of State for Transport Grant Shapps has refused to say what the final bill for taxpayers will be saying the matter is “subject to commercial confidentiality.”

But the latest report and accounts of South Western’s co-owner First Group, says that “progress has been made” as to the “level of strike amelioration recoverable from the DfT.” [Department for Transport].

RMT has calculated that if the forthcoming four days of action are included then the total strike bail out that South Western can expect to get to date is £32m, the equivalent of a 3.4 % annual fare cut for South Western passengers.

“Passengers will be outraged to know that South Western Railway will be paid by Ministers even when they don’t run trains on strike days.

“Despite repeated Ministerial cover-ups rail bosses are now openly bragging that they will be receiving a taxpayer funded strike bailout, which we estimate to be £32m to date or the equivalent of a 3.4% percent annual fare cut for South Western passengers.

“Thanks to the generosity of the government South Western Railway don’t lose a penny from strikes and therefore have little incentive to negotiate seriously.”


March 2019 First Group Annual financial statements
“There is considerable uncertainty about the level of passenger revenue growth and future impact of the industrial action in addition to uncertainty as to the level of strike amelioration recoverable from the DfT, and we remain in negotiations with them.
Progress has been made and we continue to be engaged in discussions with the DfT to agree potential commercial and contractual remedies but, at the current time, there is a range of potential outcomes.”

Q
Asked by Kate Hoey
(Vauxhall)
Asked on: 19 July 2019
Department for Transport
South Western Railway: Industrial Disputes
Commons
279375
To ask the Secretary of State for Transport, pursuant to the Answer of 25 July 2018 to Question 166508 on South Western Railway: Industrial Disputes, whether (a) he and (b) officials in his Department have provided advice South Western on payments that will be made to reimburse that company for revenues lost as a result of official industrial action.
A
Answered by: Grant Shapps
Answered on: 29 July 2019
This information is subject to commercial confidentiality between the parties.

Calculations
Using official passenger income reports, strike day figures and estimates of the impact of industrial action, RMT has attempted to project what the dispute will have cost FirstGroup and what they are likely to be seeking in compensation.
This analysis shows that, using a conservative estimate of the impact of the strike action – based on South West Railways’ own statements – the company may be seeking at least £32 million in
Table 1: Compensation for lost passenger revenue from industrial action on South West Trains

4 Strike day revenue losses are based on 100% service cancellation.

5 The estimated real loss is based on a conservative estimate of 30% strike day service cancellation and is based on South Western Railways’ statements.

[1] Passenger income is taken from the figures reported to the ORR for 2017 and 2018 and contained in https://orr.gov.uk/rail/publications/reports/uk-rail-industry-financial-information . The passenger income figure for 2019 is projected using 2018's figure uprated by inflation of 2.8%.

[4] Strike day revenue losses are based on 100% service cancellation.

[5] The estimated real loss is based on a conservative estimate of 30% strike day service cancellation and is based on South West Railways’ statements.