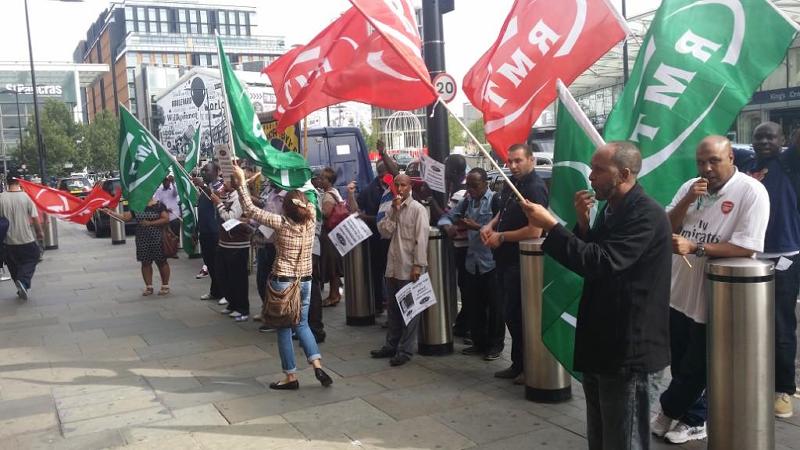 Cleaners working on the St Pancras station and Eurostar contracts for high-profile facilities company Interserve are “rock solid and determined” on picket lines at the station this morning in a fight over jobs and workplace justice.

The cleaner’s downed tools at 5am this morning in 24 hours of high-profile action  in the heart of London designed to shame the company, and those who hire them at the top of Eurostar and St Pancras International, into reversing their savage cuts plans.

RMT has demanded this morning that Interserve call off immediately a campaign of intimidation and bullying targeted at union members who have overwhelmingly voted for the strike action.

Like many contract cleaners, the Eurostar contract is subject to regular tender with cut-throat cleaning contractors competing to win the work.  Staff get transferred from one contractor to another like pieces of meat, but the business model of the companies is all the same – hacking back on pay and conditions to maximise profit while offering the workforce as little as possible.

Interserve won the St Pancras/Eurostar contract from Network Rail in exactly this fashion - through a massive cut in the price for the work.  In order to protect the company profits and hand-outs to shareholders Interserve have imposed 30% job cuts on their cleaning workers.  This means massive pressure on the staff making up for the people who have been cut.

Staff are also sick of the workplace culture - continual aggression and bullying from the employers who expect the same standards of work and output, but with a third less staff.  As RMT says “They call it efficiency – we call it harassment.”

As a result staff have had enough and are making a stand by taking 24-hour strike action from 5am today.  The workforce already suffer from low pay, no sick pay and get only the statutory minimum from our employer, but they are not prepared to be intimidated anymore.  The workloads that Interserve is imposing are too much and will not be tolerated in the culture of bullying and harassment that is rife at the prestigious Eurostar, St Pancras International terminal.

The RMT union demands are simple:

“Our members working for Interserve on the Eurostar and St Pancras contract are rock solid and determined this morning in their action to halt the job cuts and in their demand workplace justice. On the concourse at St Pancras a glass of wine at the Champagne Bar can cost up to £30 with a bottle ranging anything up to a grand and yet the people who clean up the mess left behind are subjected to threats of job cuts, a culture of bullying and intimidation and working conditions that are simply disgusting.

“It is a disgraceful stain on London as a world-class capital city that staff at the prestigious Eurostar/ St Pancras International terminal are being treated like dirt by a company, Interserve, whose sole motivation is profit.

“RMT will not tolerate a situation where these cleaners are kicked from pillar to post behind closed doors and today their fight for workplace justice has spilt out onto the streets around the station and will be the first thing that many visitors to London will see on their arrival.

“RMT remains available for talks aimed at resolving this shocking injustice which is another example of the gap between rich and poor in this wealthy City.”