Staff at Waterloo Station to strike again on Friday 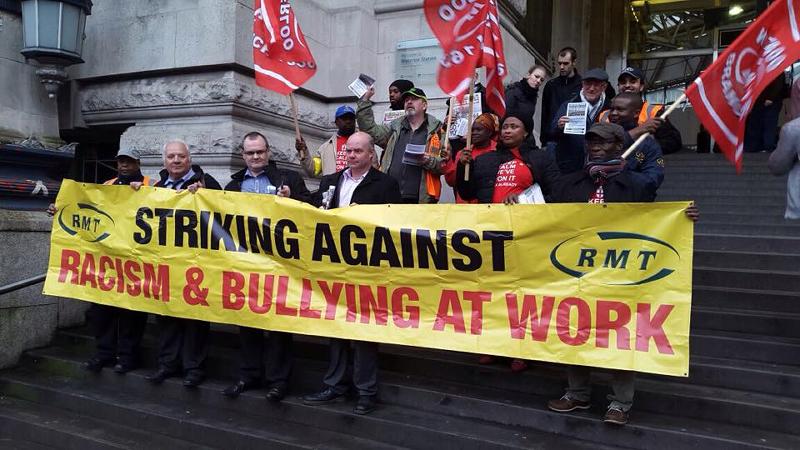 Following two earlier phases of rock solid action last month, cleaners employed by Interserve, looking after the busy and internationally famous Waterloo Station in London, are to strike again from friday over a comprehensive breakdown in industrial relations relating to a whole range of fundamental issues including;

•         the unwarranted victimisation and dismissal of RMT members

RMT has also received reports of shocking racism by local Interserve managers that the company has refused point blank to address through agreed procedures. They include one manager telling a member of staff that in their opinion “[Interserve] should not employ black people”.

In a desperate attempt to break the earlier action, the union understands that Interserve resorted to using agency workers from around London in an effort to provide a skeleton service and undermine the strikes. This has raised grave concerns about the possible impact on health and safety during the strike action. The union has informed Interserve that if they continue to use agency labour during legitimate strike action then they will be breaking the law.

The action will start on Friday, 5th December at 2.59pm with a picket line and protest throughout evening rush hour at Waterloo Station Exit 5 – opposite the old Eurostar terminal.

On the day before, Thursday 4th December 2014, at 4pm the strikers and their supporters will be taking the campaign to Interserve’s London HQ - Capital Tower 91 Waterloo Road Waterloo LONDON SE1 8RT

"RMT and the entire trade union movement salutes the rock solid strike action of the Interserve workers last month and their determination to secure workplace justice. Due to the intransigence of the company we now have no option but to declare a third wave of action. As travellers are heading home on Friday full of festive bonhomie they should stop and talk to the station cleaners about their shocking working conditions.

“The appalling treatment of cleaners at the busy and iconic Waterloo Station is nothing short of a disgrace and has led to a complete breakdown in industrial relations which left RMT with no option other than to ballot for strike action. This union has rarely come across a more vindictive and aggressive approach to low-paid staff, doing some of the most under-valued work on our railways, and the situation at Waterloo shames London.

“The overwhelming vote for action shows clearly that this determined and organised group of staff are not going to put up with the outrageous culture of racism, bullying and harassment and they deserve the full support of the entire labour and trade union movement..

“These staff are doing dirty jobs in often appalling conditions and the very least that they can expect is to be treated with dignity and respect. Not only are our members being denied the most basic levels of fair treatment and workplace rights but they are being subjected to a daily regime of bullying, victimisation and harassment which includes disgraceful incidents of racist abuse.

“Interserve, and Waterloo Station itself, cannot sweep this situation under the carpet. RMT is demanding workplace justice for the cleaners at Waterloo and the union remains available for talks aimed at securing that.”