Ten thousand cards to be delivered to Transport Department 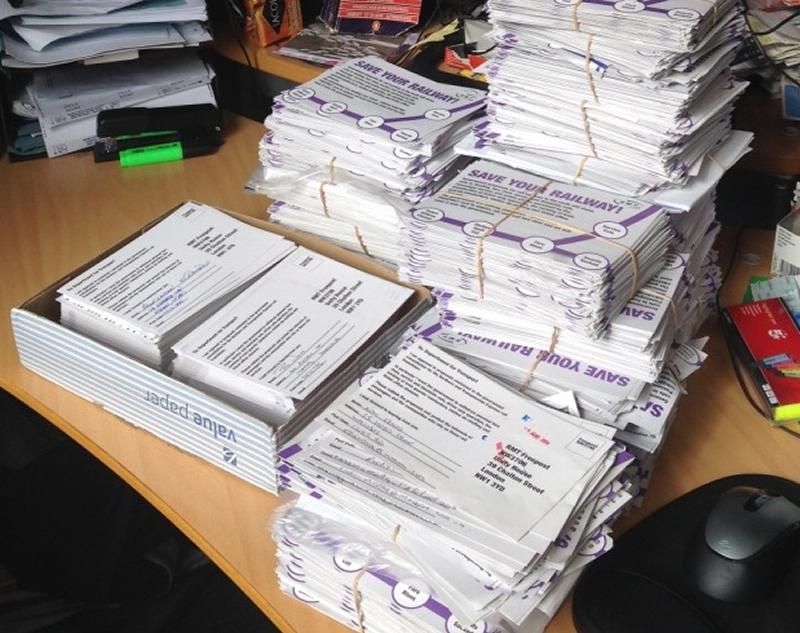 RAIL UNION RMT will deliver nearly ten thousand post cards to the Department of Transport tomorrow, Monday 18th August as the consultation on the future plans for the Northern and Trans-Pennine Express franchises comes to a close.

The main thrust of the plans out to consultation is:

In fact, the plans are already being smuggled in before the consultation has even closed. Last week , RMT revealed that the Government and Northern Rail are colluding to axe off-peak fares in the name of private profit from next month in what the union describes as “a kick in the teeth for the travelling public and a taste of what’s to come under the new Northern and Trans-Pennine Express franchises which are currently out to public consultation.”

Under the new arrangements, which have only just been confirmed to unions and staff, from the 8th September off-peak tickets can no longer be used during key times on weekday evenings.

Northern Rail have put their hands up and openly admitted it’s a pure cash-raising exercise driven directly by the Government.

“The changes are being made after the Department of Transport asked Northern to look at several options to generate additional revenue as part of its new franchise agreement.” – Northern Rail staff circular.

“It is disgraceful that plans that will whack up fares, axe jobs and services and reduce both the Northern and Trans-Pennine franchises to an unsafe, money-making racket, are being bulldozed through under cover of a wholly bogus consultation. If RMT officials and activists hadn’t organised almost fifty events, and a major press campaign, the vast majority of people would have known nothing of this huge rail carve-up.

“The plans are already afoot before the consultation has even ended, the axing of off-peak fares on Northern is a savage kick in the teeth for people already struggling with the burden of low pay and austerity and the fact that it has been cooked up by the Department for Transport in collusion with the privatisation pirates from Northern Rail is a warning of what’s to come.

“Let’s not forget that the core of the Government’s future plans for Northern and TPE is to axe jobs, throw the guards off the trains and jack up fares while capacity to meet surging rail demand in the area is left to stagnate. That attack on the fare-paying public has already begun and the delivery of nearly ten  thousand cards protesting against the plans this Monday is only the start of the RMT-organised fightback.”