TfL staff to lobby board meeting at City Hall 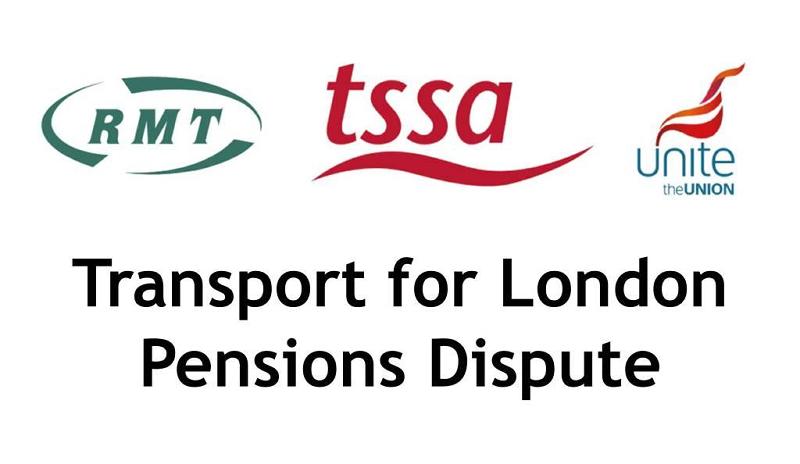 RMT – along with sister unions TSSA and UNITE - will be holding a lobby of the TfL Board meeting at City Hall on 5th November between 09.00 and 10.00am over an all-out attack on pay and pensions that would condemn to staff to a life of poverty in retirement. The lobby will also draw attention to the continuing threat to jobs, services and safety across the TFL network and London Underground.

For the best part of a year, TFL have point-blank refused to engage in serious negotiations over their plans for what amount to a performance-related pay freeze and savage cuts to pension rights.
The savage attacks that TFL are looking to bulldoze through would mean:
•    Pay rises will be one off lump sums and would not count towards pensionable pay with final salary pensions reduced.
•    An immediate pay freeze over the next five years for at least 50% of staff
•    The annual pay award would be placed at the discretion of managers and no longer fully negotiated with the recognised trade unions
•    Any pay rises would be determined by punitive and discriminatory “individual performance” processes which we believe will leave staff at the risk of bullying and harassment.

The impetus behind management’s proposals is purely and simply cash-led cuts, a situation that will become worse over the forthcoming years as there are further reductions in TFL’s grant and the expectation that further assaults on jobs, pay and pensions are being lined up for the future.

“The current TFL pension proposals are nothing less than a concerted attack on terms and conditions and would have a major effect on the future of the entire TfL Pension Fund. TfL have refused to budge on this important issue despite the staffs clear rejection of their proposals. The unions have demanded that TFL immediately withdraw the toxic “Pay For Performance” plans and get back round the table but our concerns have been ignored and that is why we will back at City Hall on the 5th November.”

“This attack on TFL pay and pensions has to be seen in the wider context of Government austerity cuts to TFL’s funding and once again it is the staff who are being lined up to take a hit that would not only whack them in the pocket now but would condemn them to lives of poverty in retirement. The pension and pay assault also has to be seen against the backdrop of the continuing threat to jobs, services and safety on London Underground which are driven by the same multi-billion cuts attack.