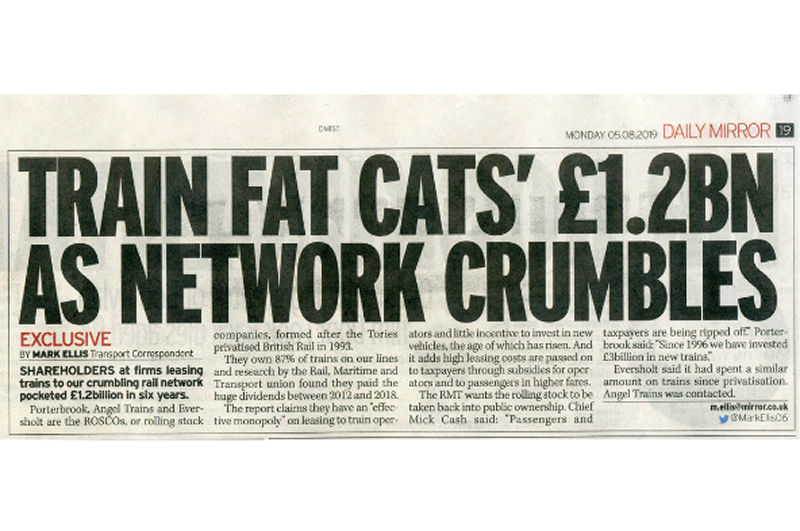 New RMT research has revealed that the private companies responsible for supplying trains to the railways have been paying massive dividends to their shareholders – money that could have funded hundreds of new vehicles – while shuffling money away into overseas companies based in Luxembourg to avoid paying tax.

Three rolling stock leasing companies (ROSCOs) paid £1.2 billion in dividends to their shareholders between 2012 and 2018, enough to fund 700 new vehicles, while figures on inter-company lending suggest that this is just the tip of the iceberg.

The firm’s own 87 per cent of the rolling stock on Britain’s railways and were formed after the Tories privatised British Rail in 1993 and handed BR’s stock of 11,250 vehicles, assets which had been funded by public investment.

When the then Tory PM John Major privatised the railways under EU directive 91/440, travellers were told fares would fall, but the cost of some tickets has risen by 250 per cent in the intervening 26 years.

Department for Transport data also shows the average age of rolling stock has risen since privatisation, from 16 years in the last year before privatisation to almost 20 years in 2017/18.

RMT’s report The ROSCO Racket report shines a light on the shady world of rolling stock provision by examining company accounts of the three companies between 2012 and 2018 and tracing their ownership structures, including uncovering their use of Luxembourg based companies set up with the sole intention of channelling money up through company structures without paying tax.

• Between 2012 and 2018, the ROSCOs passed on a total of £1.2 billion to their parent companies or owners in the form of dividend payments. To put that in context, three companies paid out the same amount as all the Train Operating Companies managed across 20 franchises over a five-year period between 2012 and 2017.

• The dividend payments the ROSCOs have made to their overseas parent companies between 2012 and 2018 would have financed the capital costs for a further 700 vehicles. This is more than enough to fund the demand for rolling stock on High Speed 2 over Control Period 7.

• In addition to the dividends they pay, these companies engage in extensive inter-group financing which enables them to extract profits in the form of interest payments. Most of this is concealed within company accounts, but one interest on one loan paid by Eversholt to a parent company in Luxembourg amounted to almost £328 million, more than its dividend payments over the same period and enough to finance the capital costs for 172 new vehicles.

• The three ROSCOs are now owned by large asset management funds working for investment banks and institutional investors focused on the market in infrastructure such as ports, toll roads, airports, water and electricity companies and rail. Infrastructure is attractive to these funds because it is characterised by investment costs, predictable income, low exposure to economic cycles or market volatility and high barriers to market entry that prevent competition and allow the companies to raise prices over time. In other words, they are reliable sources of income based on services that people will always need which are relatively easy to monopolise.

• All the ROSCOs have owners with companies based in Luxembourg, which is a low tax regime in which interest payments between companies are not taxed. In 2014, the LuxLeaks (leaked papers revealing the tax agreements of dozens of companies in Luxembourg) revealed that in 2009 AMP Capital, who now own 65 per cent of Angel Trains, were using a complex web of companies using various forms of intra-group lending to avoid paying tax on money they were extracting from Angel Trains and other investments. 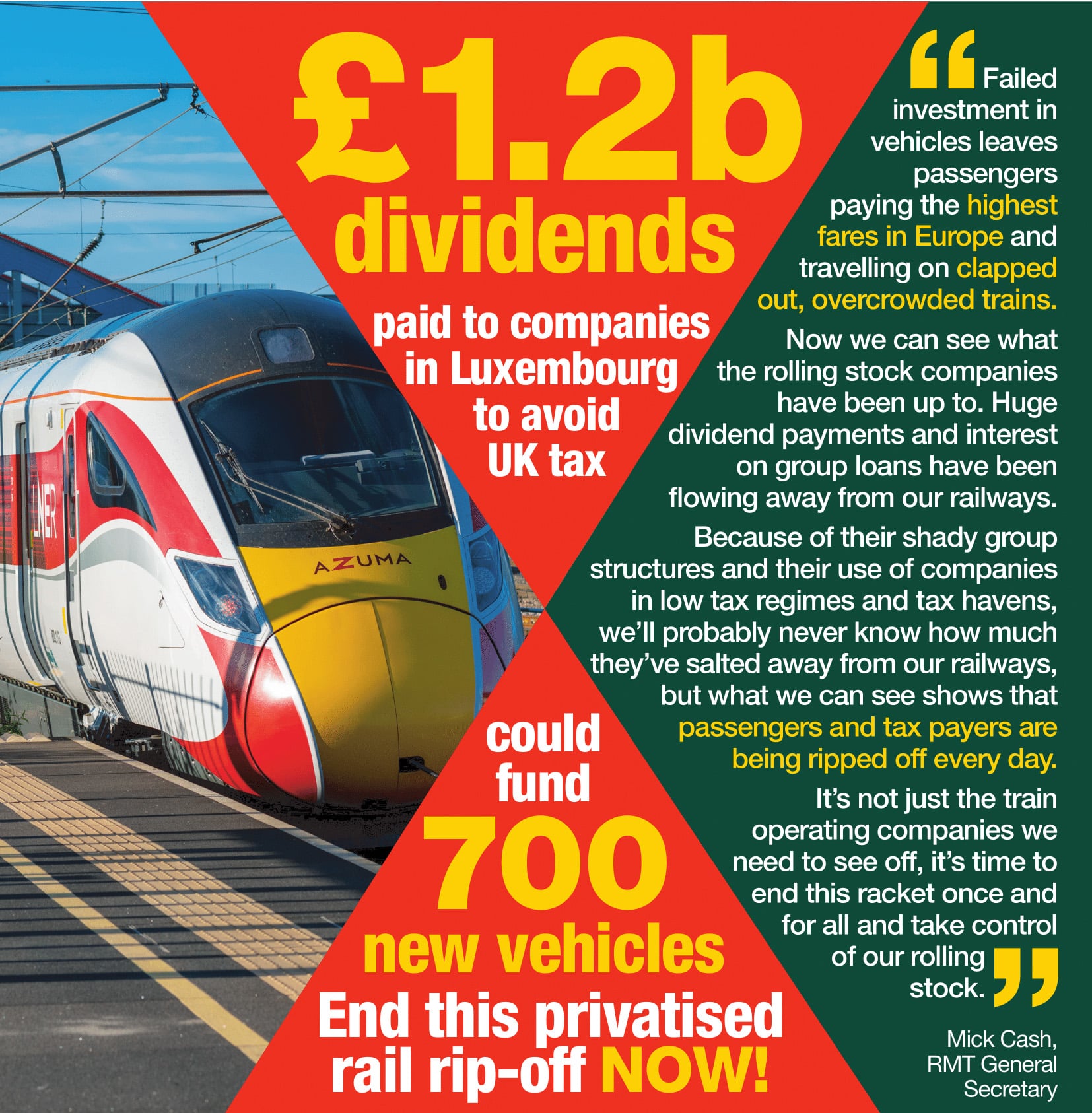 RMT general secretary Mick Cash said that the figures should be a wake-up call for the new Transport Secretary.

“For years, we’ve known that the rolling stock companies have failed to deliver new investment in vehicles for a modern railway, leaving passengers paying the highest fares in Europe to travel on clapped out, overcrowded trains.

“Now we can see some of what they’ve been up to. Huge dividend payments and interest on group loans have been flowing away from our railways.

“Because of their shady group structures and their use of companies in low tax regimes and tax havens, we’ll probably never know how much they’ve salted away from our railways, but what we can see shows that passengers and tax payers are being ripped off every day.

“It’s not just the train operating companies we need to see off, it’s time to end this racket once and for all and take control of our rolling stock,” he said.