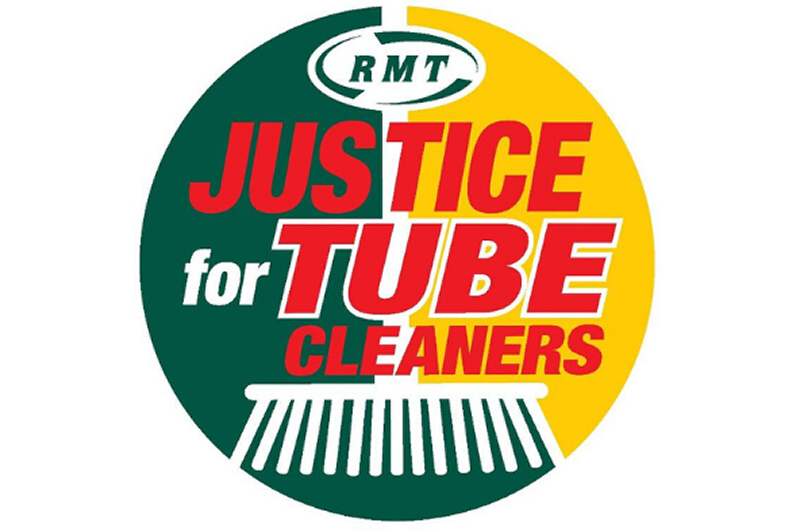 As tube cleaners ballot for action RMT reveals they would have to work 20 years to earn a TfL executive’s annual pay packet.

As tube union RMT ballots Tube cleaners for industrial action for pay justice the union has revealed that an Underground cleaner would have to work for nearly 20 years to earn the £374,000 TfL’s highest executive makes in just one year, while it would take them 246 years to earn the £4.5 million the CEO of the US outsourcing company that employs them pulls in annually.


Yet in spite of the shocking pay differentials, tight-fisted ABM and TfL executives refuse to give these low paid workers staff travel rights on the TfL network.


Even worse, hypocritical TfL bosses themselves get the staff travel benefit while denying it to the people who clean their trains and stations.


RMT is balloting ABM’s cleaners for industrial action as part of the union’s fight for parity with their London Underground colleagues in relation to pensions, sick pay and staff travel, following the failure of both ABM and TfL to tackle this injustice.


The union’s research now shows that the people responsible for this scandal are earning astronomical amounts while enjoying final salary pensions and staff travel benefits that they are denying to the people who work hard every day and night to keep the Underground clean.

“It is scandalous that the people who do some of the hardest and dirtiest work on London’s transport network are treated differently to other London Underground staff while the company that employs them and its top executives profit from their work.
"The disgrace of the two-tier workforce on London Underground is a stain on the capital city and RMT intends to make support for this essential group of workers, keeping London moving day in and day out, a major election issue.

“We are balloting our cleaner members on the London Underground employed by ABM and are campaigning for strong yes vote for industrial action in their fight for equal treatment at work with regard to travel facilities, sick pay and a decent pension.”

Notes for editors:
ABM cleaners’ work is some of the hardest and dirtiest work on the Underground. Their average salary works out at around £19,029.
ABM’s cleaners struggle to get by and are denied key terms and conditions that are normal expectations for other workers employed by London Underground and TfL. For example, they don’t receive free travel on the TfL network in spite of the fact that many of these workers travel far across London at unsocial hours to work long shifts on the Tube.
Table 1: ABM cleaner’s pay and conditions
* Calculated from ABM Facility Services Ltd’s company accounts, 2018.
RMT conducted a survey open to ABM cleaners in the union’s membership between 18 June and 4 July 2019 and received 95 responses.  68% of respondents reported that they sometimes or regularly struggle to make ends meet.
The people making the decision not to give these workers free travel or proper pensions are themselves benefitting from it as highly paid TfL and London Underground employees.
Table 2: TfL and London Underground Executive pay

http://content.tfl.gov.uk/tfl-annual-report-and-statement-of-accounts-2018-19.pdf , p. 104
ABM is a multinational outsourcing company based in the US. Its UK cleaning arm made a profit of £3 million in the first year of its contract with London Underground.
In its most recent Annual report, the company reveals that its strategy requires it to sweat its overseas contracts to service its debt, while its CEO Scott Salmirs was paid the equivalent of £4.6 million in 2018:
“To service our debt, we will require a significant amount of cash. Our ability to generate cash depends on many factors beyond our control. We also depend on the profitability of our subsidiaries to satisfy our cash needs.” [1]  ABM Annual Report, 2018
Table 3: ABM Executives – the people who profit from outsourced cleaners:
https://abm.gcs-web.com/static-files/2473eafb-7a13-4c4a-81bb-5eff51f6b020 ,  p. 32
*ABM Facility Services company accounts, 2018.
**Converted to Sterling values. See p. 32
[1]   http://www.annualreports.com/HostedData/AnnualReports/PDF/NYSE_ABM_2018.pdf , p. 7