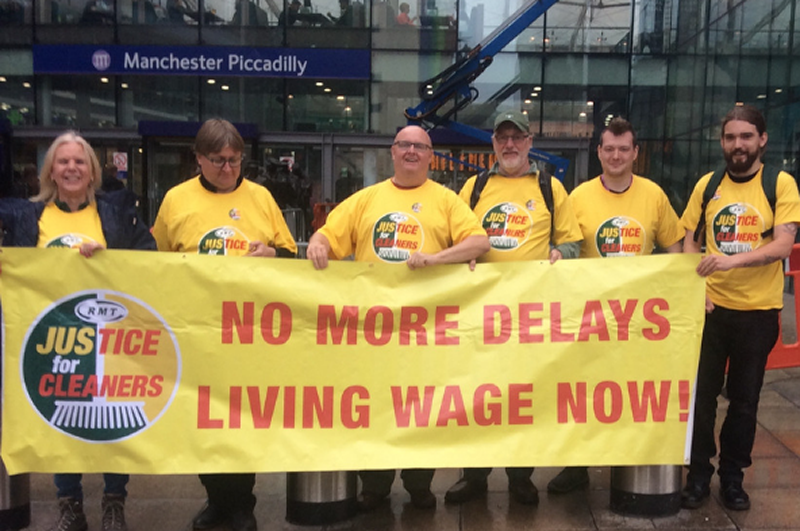 Westminster MPs support RMT cleaners fighting for a Real Living Wage, while Mitie boss makes do on a cool £2 million

The campaign to ensure that Mitie pay their cleaners working on Network Rail stations a Real Living Wage received a big boost today as MPs tabled an Early Day Motion calling on the company to meet their demands.

This follows a similar motion in the Scottish Parliament, which has already attracted cross-party support. The campaign has also received the support of more than 75,000 members of the public through a 38 Degrees petition.

Make sure the Mitie Group ensures that the people who clean stations for Network Rail - who do some of the dirtiest work in the rail industry - are paid the Real Living Wage. No More Delays - Pay the living wage to Mitie cleaners NOW.

Network Rail has outsourced cleaning for several of its mainline stations to Mitie Facilities Management, part of the Mitie Group plc. Mitie Facilities Management paid nearly £49 million to its parent company in the last five years. But it won’t pay its cleaners the Real Living Wage. That means that passengers using Network Rail’s stations at Manchester Piccadilly, Leeds City, Birmingham New Street, Liverpool Lime Street, Glasgow Central and Edinburgh Waverley are passing through stations that are cleaned, day and night, by people who are surviving on poverty pay. More than 50% of respondents to an RMT survey of Mitie cleaners said they struggled to make ends meet.


“RMT welcomes the support in Parliament that this Early Day Motion gives for our campaign for Mitie cleaners to be paid the Real Living Wage.


“Following on the heels of a similar motion in the Scottish Parliament political and public support is rolling in.


“The strength of support from the public can be seen by the fact we now have over 60,000 signatures on the petition backing this fight for pay and workplace justice.


“It is a scandal that the staff employed by outsourcing giant Mitie who clean stations for Network Rail, doing some of the dirtiest work in the rail industry at all hours of the night and day, are struggling to make ends meet on poverty pay. It is time for Mitie and Network Rail to end this disgraceful exploitation and take urgent action.”

The Early day motion, tabled by Ian Mearns MP, reads as follows:
Real Living Wage for Mitie employees at Network Rail Stations
That this House commends the action of RMT members employed by Mitie Group plc who clean Network Rail stations at Edinburgh Waverley, Glasgow Central, Liverpool Lime Street, Manchester Piccadilly, Leeds City and Birmingham New Street stations, who are fighting for a Real Living Wage; notes with concern that Mitie refuses to pay the Real Living Wage, that its employees reported to an RMT survey that around half of them struggled to make ends meet; further notes that notwithstanding this, the company has passed on £49 million in dividends to its shareholders in the last five years; believes that Mitie should agree to pay the Real Living Wage to its cleaning staff; and further believes that Network Rail and all who sub-contract work on the UK railway network should pay at least the Real Living Wage throughout their supply chains.
https://edm.parliament.uk/early-day-motion/53241/real-living-wage-for-mitie-employees-at-network-rail-stations

Make sure the Mitie Group ensures that the people who clean stations for Network Rail - who do some of the dirtiest work in the rail industry - are paid the Real Living Wage. No More Delays - Pay the living wage to Mitie cleaners NOW.

See pages 74 and 75 of Mitie’s Annual Report for 2019 here: https://www.mitie.com/Mitie/media/downloads/Investor%20relations/Mitie_Annual_report_2019.pdf?ext=.pdf