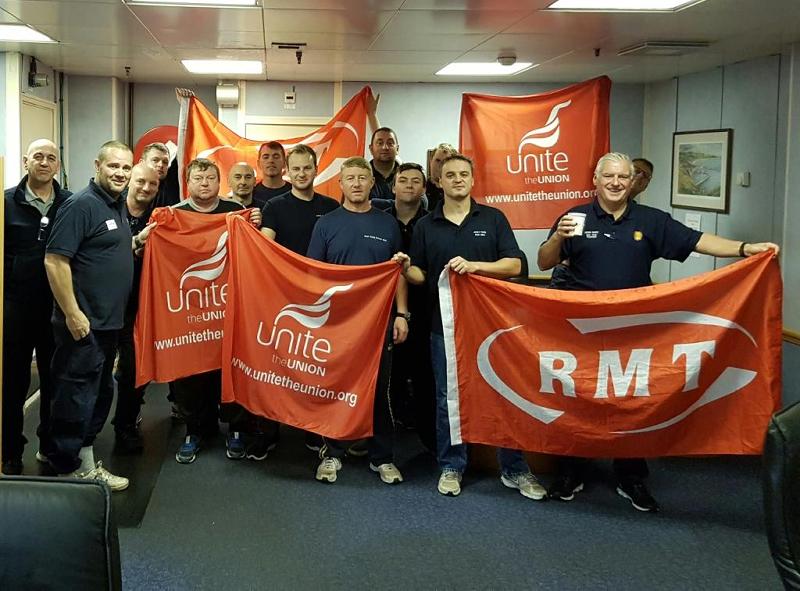 Following a continuing failure by the Wood Group to come up with any solutions in talks over pay reductions, proposed cuts and changes to working conditions on Shell’s North Sea oil and gas platforms the next phase of industrial action scheduled to start in the morning goes ahead.

The company are proposing cuts to members’ pay which could amount to up to 22%, however once reductions to allowances are factored in, the cut could be as much as 30%. RMT, along with our colleagues in our sister trade unions, have objected to these proposals in the strongest possible terms but the company have failed to move.

RMT maintains that the situation is totally unnecessary as the Wood Group have just been awarded a new five year contract for North Sea operations, which is valued at $150 million. There is also a financial bonanza letting rip in the company boardroom when it comes to top bosses pay.

Tomorrow, RMT and Unite activists – with support from across the trade union movement - will take part in two protests in support of the Wood Group/Shell workforce:

“After savage redundancies and attacks on workload and working conditions this group of offshore workers are now told that they are going to be railroaded into accepting pay cuts of up to 30%.  Despite strenuous efforts by our negotiators in talks with the company we have so far been unable to make sufficient progress that addresses the concerns of the workforce.

“The unions welcome the fantastic support that has been pouring in from around the world. We are also well aware that the company Chief Executive has had a pay increase of 28% to bring him up to £600,000. It is obscene that while the top bosses are lining their own pockets they are kicking the workforce from pillar to post.

“This brave group of workers are taking a stand against the greed and savagery that is a mark of corporate Britain in 2016. They deserve the full support of the entire trade union movement and we are delighted to have broad support from union activists for the protests in Manchester and London tomorrow.

“The unions remain available for serious and meaningful talks.”